The top review for this on Letterboxd concludes, “If you do not like Lynch movies then avoid this one at all costs.” If I’d seen that before watching, I may not have bothered: having recently endured my way through Eraserhead, I was not exactly renewing my membership in the David Lynch Fan Club. Five minutes into this b&w Swedish slice of obscureness, clearly very much in debt to it, I was bracing myself for the cinematic equivalent of having my fingernails yanked out. Yet, here we are, with a perfectly respectable rating. For while this is a film I will never watch again, I reached the end and did not begrudge the time spent. I’m likely no better informed – just confused in a way which, if not conventionally “enjoyable” or  “entertaining,” was at least interesting.

Sara Hansson (Sundén) is looking for her daughter, Jenny, last seen being brought by her husband to the building where he works. To try and find her, Sara gets a job as a cleaner in the building under a very strict boss (Lampa), but it seen becomes clear something very odd is going on in the complex, with portals opening into other space, mysterious shadow people, a tendency for time to run differently, and at the centre of the facility, a glowing light which may (or may not) be sentient, divine or demonic. With the help of a friendly janitor, Sara ventures onto the forbidden second floor, in disobedience of her boss’s orders, in search of Jenny. 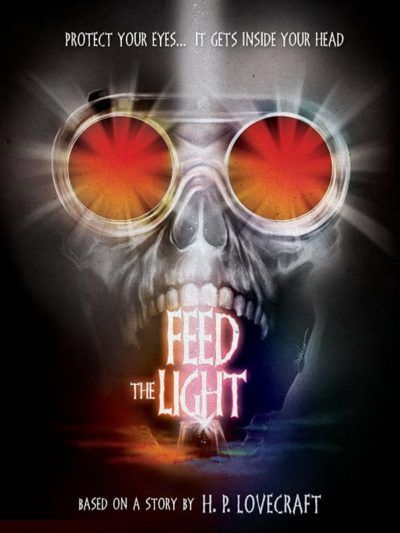 This is supposedly based on The Color Out of Space by H.P. Lovecraft, but compared to either the Italian or Nicolas Cage movies of that name, the connection seems tenuous. Inspired by, I might just about give you: this contains the same sense of lurking dread, and things hiding just beyond what we mere mortal humans can perceive. At no point here, is anything even approaching an explanation provided. To be fair, the only person who needs one is Sara, and she is simply focused, with laser-like intensity, on finding her daughter. She doesn’t care about the WTFness of the entire scenario. Personally, after being attacked by a naked man, whose anus oozes a mercury-like fluid, I’d… have questions.

That said, there does appear at least to be an internal logic at work, even if it’s not apparent to the viewer. We go along with Sara on her journey, and if the ending can hardly be said to tie up the loose ends, it does leverage one of the elements into a rather poignant finale. All told, considering the tiny budget, small cast and zero sets – it largely unfolds in a series of corridors – I find myself thinking back more warmly on this than I felt as I was watching. It seemed a garbled mess, and it probably is. Yet unlike the over-rated Eraserhead, I can squint and potentially see a way I could be convinced of its qualities.