I can’t help feeling they missed a trick here, by failing to call this Crocodile Rock. It would surely have been worth a cease-and-desist order from Elton John’s publishing company. It takes place in the Chinese equivalent to Bermuda Triangle, where planes are liable to crash unexpectedly: the main cause appears to be mid-air strikes with flocks of prehistoric flying reptiles. These serve no other purpose, and are not am introduction to the Dinopalooza for which I initially hoped. They just exist to bring the characters down to earth, literally, so crocodiles ranging in size from normal to attack submarine sized can munch on them.

This begins with an utterly inept scene set in 1945, in which two American airmen suffer death by putrid digital effects. Though the worst thing is probably the horrendous dubbing, written and performed by someone whose knowledge of English consists of looping sentences repeatedly through a poor online translator, just to be sure. We almost turned the movie off, and considering what we have sat through, that’s damning indeed. Fortunately, it does improve as we switch to the modern day, and a plane load of passengers flying back from Australia to China. This is brought down in a sequence nasty enough to ensure the feature won’t be part of any in-flight entertainment packages, and also whittles down the cast to a number manageable by the remainder of the movie. 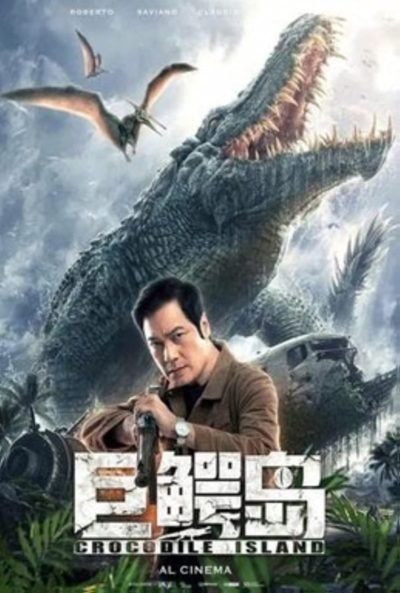 Leading the survivors is Lin Hao (Lo), a single father struggling with his whiny teenage daughter Lin Yi (Liao). You just know she’s going to learn respect for her father by the end of proceedings. There’s also her boyfriend, to whom Hao takes an instant dislike (you just know the two are going to end up bonding by the end of proceedings), a couple expecting their first child, a social influencer, a guy with a heart condition, etc. Their survival chances are determined largely by how pleasant they are to other people. China’s “social credit” system has clearly expanded to include being eaten by giant reptiles, among its list of potential punishments for anti-social behaviour.

Things mostly proceed as expected after their arrival, though I was impressed by the way items left behind from World War II still function impeccably, 75 years later: American tech kicks ass. The main interesting deviation is a rather good sequence involving the party waking up to find themselves in the middle of a nest of giant spiders. [No, Jon Peters did not have anything to do with this film] It’s surprisingly well-staged, and the effects for the arachnids are up to scratch. I particularly liked Hao whacking off the end of a spider’s leg, and then using it as a weapon against the, now understandably aggrieved, creature with 7¾ limbs. It goes some way to redeeming the terrible start, though as a whole, the film remains no more than workmanlike.