The recent Richard Stanley/Nicholas Cage adaptation was far from the first attempt to film H.P. Lovecraft’s titular short story from 1927. Die, Monster, Die! (1965) was loosely based in it, as was 1987’s The Curse. Ivan Zuccon, whose stab at Re-Animator we reviewed recently, also took on the story in Colour from the Dark (2008). While the story is regarded as one of Lovecraft’s best, none of the film versions have particularly achieved fame. I think it’s perhaps because it’s one of the trickier ones to film. The antagonist is particularly opaque, being basically a space blob whose motives are entirely unknown. It’s also one where the author left his descriptions intentionally vague, and it feels like film-makers have struggled to fill in the blanks in a way that captures the intended effect. 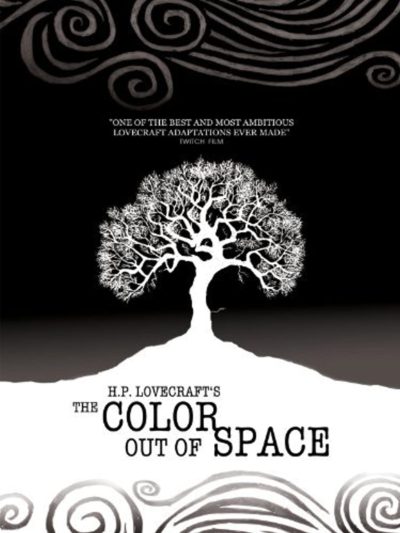 Here is a case in point. Vu relocates proceedings to Germany, around World War II, though this is mostly told in flashback. American Jonathan Davis (Heise) is looking for his father (Pierce) ,who has disappeared. apparently returning to a remote corner of Southwest Germany, where he had been stationed as a GI just after the war. Jonathan goes there, attempting to track him down, and meets up with local resident Armin Pierske (Kausch), who tells a creepy story about an incident that happened just before the war. A meteor landed on the farm of the Gartener family, and its effects changed first the plants, then the family, after it seeped into the well which provided their water.

The film is shot entirely in black-and-white, except for the extra-terrestrial colour itself, which is depicted in pink, not dissimilar to the shade used in Stanley’s version. It’s a neat idea, both enhancing the period atmosphere and making the alien nature of the intruder particularly palpable. The main problem is… well, not a lot happens. With the narrator being outside the Gartener family, we’re not privy to the specifics of what’s going on inside. It’s also the case that the original work isn’t that long – about 12,000 words – so a faithful adaptation is going to require a lot of extra stuff to reach feature length. This doesn’t really have much more meat, and there’s only so far atmosphere can take you, in terms of running time.

On the other hand, Vu does a decentish job of generating that atmosphere, even if the period elements seem somewhat superfluous (the war doesn’t particular matter). There is the addition of one interesting element: the valley is about to be flooded as part of an engineering project, which will potentially expose a far larger population to the alien presence. However, it’s not as if there’s exactly a ticking clock on proceedings, and things unfold at a languid pace, albeit with an appropriately Lovecraftian vague sense of looming threat. But without even the bonus of Nicholas Cage Losing His Shit, there is not sufficient purpose to make this more than another data point, on just how difficult it is to make Lovecraft adaptations which do justice to the source material.