It’s easy to forget that, when what we recognize as World War II started, China and Japan had already been fighting each other for two years. Japan had taken over a significant swathe of Chinese territory, including in 1937, the city of Nanjing, which was then the country’s capital. This led to one of the most infamous incidents in history, the Rape of Nanjing, in which certainly tens and possibly hundreds of thousands of people were brutalized and/or killed in a period of six or so weeks, after the city was occupied by invading forces. It’s still a subject of controversy today, capable of souring Sino-Japanese relations. 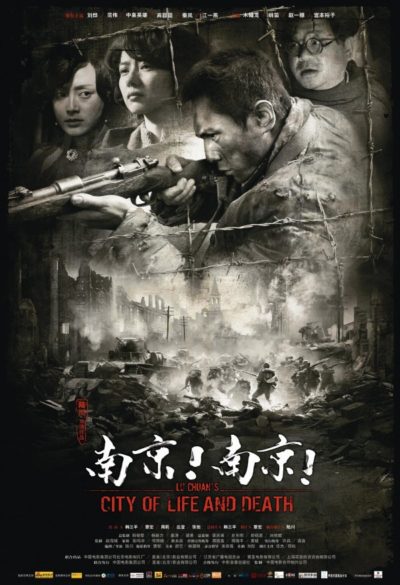 This film… Well, let’s just say, probably won’t help matters, being an unflinching depiction of the atrocities which unfolded over that time. It’s not particularly graphic, and being filmed in black and white helps create a historical distance for the viewer. But, still: it’s 134 minutes of largely unrelenting and  downbeat grimness, as prisoners of war are mown down by machine-guns, while civilians are killed or forced into service as “comfort women”, providing sexual release for the occupying army. About the only “good guy” is John Rabe (Paisley), a Westerner who tries to set up a neutral zone in the city, where non-combatants can seek shelter. Oh, yeah: and he’s German, and a card-carrying member of the Nazi party. That’s the closest the movie has to a hero, folks.

The main character, however, is a low-level Japanese soldier, Masao Kadokawa (Hideo), who is among the first to arrive in the city, and experiences the resulting carnage from ground level. It’s never made quite clear who is in charge here; things simply seem to happen, as much for reasons of expediency as cruelty [why bother feeding and taking care of captured prisoners?] As such, the relatively sympathetic portrayal of Kadokawa, who is clearly troubled by the acts of his fellow soldiers, caused the director to get death threats. Like I said: the subject remains touchy to this day. The lack of any antagonist does leave the film somewhat lacking, and indeed, there’s not really much of a narrative here. Stuff happens, but it’s more a series of incidents than a story.

There are also points which do seem a little jingoistic, such as the sequence where the POWs march to their doom, basically chanting “Let’s go, China!” in unison. On the other hand, the technical aspects are amazing. It feels as if the makers built a full-scale, half-destroyed city, then completed the process by blowing the shit out of it. The first half-hour in particular feels almost as if you are watching actual documentary footage of the event. While not as graphic or shocking as Men Behind the Sun, the production values here are far, far higher, and they definitely play into the impact. For me, this is a better depiction of the horrors of war than, say, Come and See, and shines a light on a corner of history of which we in the West are largely ignorant.