This film stumbles out of the gate, setting up its scenario in a way more befitting an entry-level history course. We are in 8th-century Scotland, and the Picts are fighting the Gaels, we are informed. What we are not informed, however, is why we should care, or favour one side over the other. Eventually it becomes clear that the Picts are the bad guys [As a descendant from their part of Scotland, I should probably be triggered] who kill the Gaels’ monarch and send his two sons into hiding. Ten years later, we join Alpin (McGarry) and his little brother Finn (Irvine), still apparently wandering the countryside. 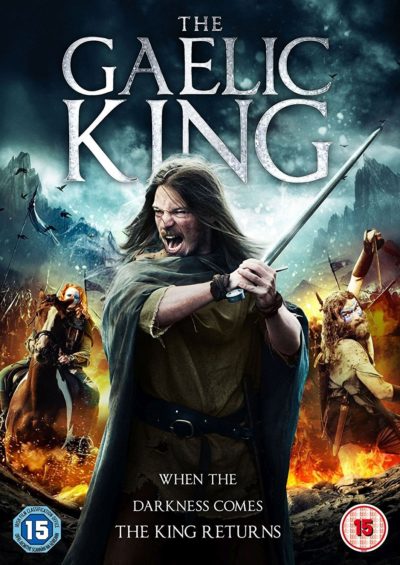 The good news? All this stuff is basically irrelevant, and can safely be ignored. It will not be on the test. Instead, the meat of the plot is about the village in which the brothers arrive, run by Pictish princess Edana (Melrose). The local children are being abducted by mysterious figures called Shadow Warriors. With the help of eccentric priest Lachlan (Whitley), Alpin goes in search of the missing kids, and finds out they are being used as a source of dark power by the sorceress Nathara. She’s played by Kerry Browne, and we know she’s evil, because Browne is the only actor sporting an English accent. She also has a left eyebrow which looks like it’s trying to make a break for freedom from her forehead.

Anyway, as you can tell, this has less in common with the likes of those Robert the Bruce movies than eighties sword and sorcery flicks like Hawk the Slayer. The main problem is the budget, or lack thereof. The “village” consists of approximately five (5) straw huts in a circle, and the bulk of the film is basically Alpin faffing about in the woods with one set of supporting characters or another. It’s a shame this is so forest-bound, given the occasionally impressive shots of Scottish scenery near the beginning and end. There’s also some stuff about a mystic sigil tattooed on the back of his and Finn’s necks, which I’d have said renders the clan brooch they’re carrying around rather superfluous.

It’s all very much cheap tat, though the performances are actually better than the production values. I particularly enjoyed Whitley’s quirky character, though I’m not sure why he’s referred to as a “druid” several centuries after St. Columba converted the Scots, especially since he’s wearing a big cross around his neck. There are occasional moments of self-effacing humour, which help as well. For instance, before the big battle, the inevitable morale-boosting speech is, in its pithy entirety: “We’re here, and they’re out there. The plan is… we’re gonna beat them into a pulp and chuck them in the midden.” Now, that’s what I call truly Scottish. More of this would have been welcome, especially as the paucity of resources makes it all but impossible to take seriously as a dramatic endeavour.