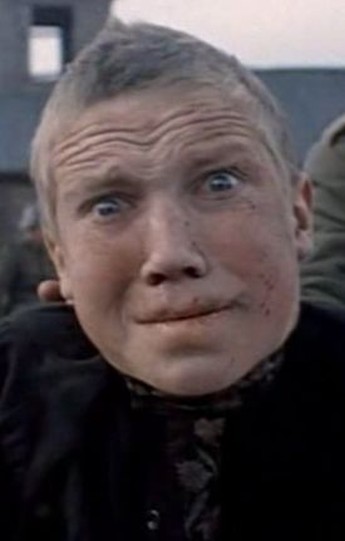 This is extremely well-regarded: almost 19,000 votes on the IMDB, averaging 8.2, and Roger Ebert called it, “One of the most devastating films ever about anything.” Maybe that over-hype is to blame: I found it lukewarm, and certainly not devastating. It’s the story of Florya (Kravchenko), who digs up a rifle out of the sand, and joins the local partisans fighting against the Nazis in World War 2. When they march off, he is left behind – his shoes are taken – and he returns home, to find the Germans have visited the village, and wiped out his family. Florya collapses into madness almost instantly, and the remaining 90 minutes are, more or less, him pulling faces while bad shit happens around him. This culminates in him being taken in by an elderly farmer, after trying to hijack the farmer’s cart – just in time for the Nazis [the infamous SS Sonderkommandos, who were utter bastards, even by the high bastardy standards of the SS] to show up. Hey, it’s okay: they simply want everyone to gather in the town square for some innocent bureaucracy. Uh… Sure…

It’s really only this final section that I felt the film had any real power, putting a human face on either side of the war atrocities, both the victims and the perpetrators. It’s certainly among the most depressing films I’ve seen, with Klimov hardly ever taking his cinematic foot off the viewer’s throat. It would probably have benefited significantly from a slower descent into madness, rather than Florya – like almost everyone else, not a professional actor at the time – and his two settings, “sane” and “off his meds.” As a result, he doesn’t really take the viewer down with him, and I was left on the outside of his insanity. Impressive though some of the scenes are – such as the one where Florya and a cow are trapped in the middle of a firefight, which used live ammo flying inches over the cast and crew’s head – they just lack the emotional wallop they should have. There’s a scene where he and a young girl he has befriended (Mironova), struggle through a swamp, up to their necks in the mud. Filmed in what feels like real-time, it’s an adequate summary of the film as a whole; you reach the end feeling grubby and exhausted, but in reality you’ll hardly have moved very far.