Having been part of the Jackie Chan Stunt Team, Nguyen is now making a name for himself as an action choreographer, working on projects as diverse as Accident Man: Hitman’s Holiday and Sanak. I was curious to see how he’d handle a leading role, back in his native Vietnam. The results are a bit mixed. He’s generally fine: however, much of the non-action stuff is somewhere on the scale between ‘Eh?” and cringe. It’s based on a 19th-century epic poem which, it appears, must be of the “needs no explanation” level in its home country. Certainly, the film doesn’t bother to explain itself.

This may be why everyone appears remarkably chill when old-school warrior Luc Van Tien (Nguyen), suddenly appears in modern-day Ho Chi Minh City, riding on his horse. He’s quickly befriended by huckster Teo (Tien), who sees financial potential in Luc, and in exchange, agrees to help him in his mission to find his true love, Nguyen Nga (Anh). But Luc quickly draws the enmity of local criminal figures, in particular the flamboyant Dasher Bui (Lam), who is involved in a sex trafficking ring. Complicating matters, Nga is becoming a business partner of Dasher. All of which is mostly an excuse for good fight sequences, and rather more variable comedy. Nguyen has a decent ability for physical stuff, like his mentor JC. The problem is more Tien, who must be the Vietnamese version of Jim Carrey: pulling faces in lieu of humour. 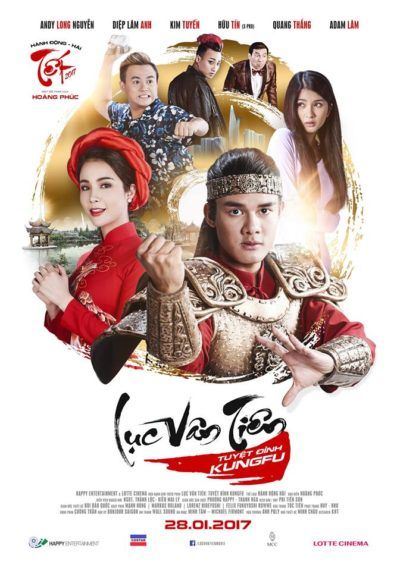 In many ways – not least, the wildly hit-or-miss nature of the comedy – it does feel like a more or less conscious attempt to recapture the feel of those eighties Hong Kong films. The most obvious touchstone is probably 1989’s The Iceman Cometh, in which Yuen Biao also played a warrior who is hurled forward into the present day, and has to come to terms with it, helped by a streetwise local. That struck a better balance between the elements than this. Here, we lurch from broad slapstick – Luc gets an electric shock, and his hair goes all frizzy – to drama to social commentary in a way that you can almost hear the grinding as the movie laboriously shifts gears.

Fortunately, we are here for the action, and I have few complaints there. Just one: I expected more from the fight against the final boss, who appears to have strolled in from Mortal Kombat. All we get is basically a warning about the perils of skipping leg day at the gym. The rest of the battles, however, are good to excellent – also involved are the Le brothers, who’d go on to do fight choreography for Everything Everywhere All at Once. [sarcasm]It was released by A24, so is clearly superior.[/sarcasm] These, and Nguyen’s boyish charms, are not enough to overcome the clunkier aspects. While acceptable overall, they keep this down at a level comparable to a third-tier Jackie Chan project – say somewhere around the level of Fantasy Mission Force.