“Warning: The following film contains Explicit Violence; Graphic Nudity; Extreme Gore; Sexual Content and Very Intense Scenes.” So reads the disclaimer which preceded this, though after an hour or so, I was wondering if I’d been watching the wrong film, since it was basically batting 0-for-5 in those categories. I will say, it likely did check off most of those boxes by the end, though not necessarily in the way you’d expect. It’s more or less a two-hander, with friends Shawn (Masurkevitch) and Manny (Brar) having a weekend away in a remote cabin belonging to Shawn’s grandmother. [Fun fact: the cabin actually does belong to the actor’s grandmother!]

Theirs is an odd sort of relationship: there’s mention of Shawn having a young daughter, but any wife or girlfriend is notable by their absence. The first 30 minutes is them hanging out, drinking, smoking weed and chit-chatting, before going for a spot of skiing through the woods. The movie enters Phase II when Manny breaks his ankle, and it turns into wilderness survival horror for the next half-hour, with Shawn having to figure out how to get his pal out of the forest to help. The problem is that Shawn’s mental state has already been established as precarious, with him experiencing hallucinations; there may be a physical cause for this, linked to his sudden nose-bleeds. Regardless, the stress of the situation tips him entirely over the edge, and his behaviour becomes ever more erratic and dangerous, both to himself and his injured companion. 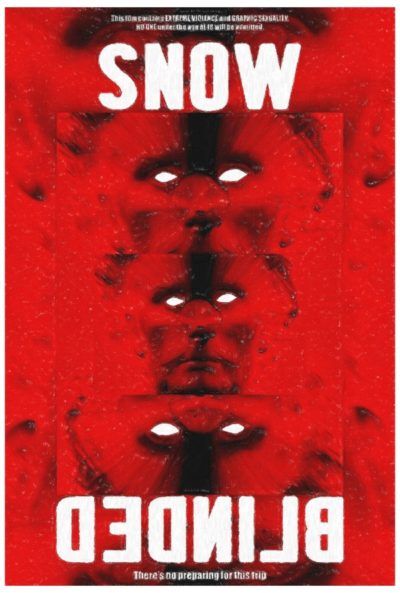 This is where the makers suddenly remember the opening disclaimer, and gets busy catching up. So we get Shawn eating Manny’s face off – or perhaps not, since it’s now impossible to tell how much of what’s depicted is a product of insanity. The nudity comes courtesy of Shawn stripping everything off bar his shoes, to run around the forest naked (top), scenes which were so chilly, they made my testicles retreat to somewhere cozy, up between my kidneys. That’s leaving everything out there for your art, folks. Then he comes across a discarded hunting knife, and my earlier suspicions things were not going to end well, proved to be entirely well-founded.

The last section is easily the best, Lockyer letting rip and dragging the audience into a full-blown mental breakdown, with few holds barred. The problem is the first hour, in which simply not enough of note happens to hold your attention. The editing choices are interesting, deliberately jarring and rough-edged to represent Shawn’s disintegrating state. Ok, so with that established: now what? The script doesn’t seem to have a good answer, and even the uptick in interest generated by Manny’s accident proves brief. The audience has a fairly clear idea of where this is going, so is left hanging around in the trees, waiting for the movie to catch up. It’s a situation perhaps not helped by the pesky disclaimer, setting expectations which the movie takes too long to satisfy.