Rather superfluously subtitled “Hope Under Siege,” this is an entirely shameless Die Hard knock-off from India. Though if you’re concerned about the whole Bollywood thing (and, I should point out, we are not), you needn’t worry – there’s just the one cringily sentimental song. Well, until the end credits, which unfold over the hero doing the typical lip-sync and energetic dance thing. I do feel A Good Day to Die Hard would have been markedly improved by a Bruce Willis musical number or two. This still works very effectively, for two main reasons. Firstly, the makers leave the winning parts of the formula alone. Secondly, the action has been beefed up, courtesy of former Jackie Chan acolyte, Andy Long Nguyen.

Storywise, we have Vivaan Ahuja (Jammwal), who goes to the hospital to pick up his wife, Anshika (Maitra), after she has had heart surgery. That’ll be the cringily sentimental song. Unfortunately – or fortunately – his visit coincides with an attack on the facility by a group of mercenaries. This is led by Captain Saju (Sanyal), with the aim of liberating an imprisoned arms dealer receiving treatment there. Naturally, Vivaan is stuck inside with the terrorists: though, of course, it’s more accurate to say, they’re stuck inside with him… Fill in the rest yourself. Innocent civilians are killed, villains picked off, etc. The main twist is, the authorities are generally competent, led by ACP Jayati Bharghav  (Dhupia). She has issues of her own, since her daughter is one of the hostages, something she can’t let her superiors know. 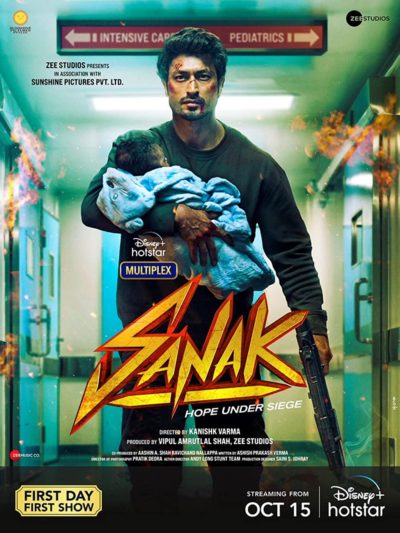 Conveniently, Vivaan is an MMA coach, so there is rather less gun-play and more fisticuffs – Saju jokes they’re on a limited budget, and the terrorists need to save bullets. Enter Long, who choreographs a series of excellent set-pieces between the hero and his enemies (conveniently, also well-versed in hand-to-hand-combat), which are as entertaining as any movie I’ve seen this year. In particular, the use of props is great, from the magnetic power of an MRI machine to a pilates ball, and reminiscent of old-school Sammo Hung. As the poster suggest, the movie also offers a baby-rescuing sequence clearly inspired by Hard Boiled; that’s likely a clone too far, because no-one does John Woo like John Woo.

It’s hard to mind too much, as the film does most things right, even if there are few developments this side of thoroughly expected. to anyone who has seen Die Hard. For example, the bad guys become aware the fly in their ointment has a spouse in their hostages, and the fact several floors of the building are under construction, also comes into play. To absolutely nobody’s surprise, it all ends up in Vivaan going one-on-one with Captain Saju. It’s definitely an upgrade from John McClane vs. Hans Gruber, since Alan Rickman was not being coached by a top-tier action choreographer. However, the most amazing thing is likely the budget: 10 crores, which is a mere $1.25 million at the current exchange rate. Suddenly, outsourcing to India makes a great deal more sense.