Most of the preceding scripts were not originally written as Bruce Willis vehicles, but were ones which had been repurposed into Die Hard franchise entries. However, you really couldn’t tell: they all seemed to be part of the same universe. Sadly, that isn’t the case here. This feels more like a political thriller, perhaps in the Tom Clancy mode, into which the lumbering dinosaur Johnius Mcclaneii has unwittingly strayed. Perhaps it’s the sudden relocation of the series from the USA to Russia? It seems largely pointless, except as a shallow grab for overseas box-office [and it appears to have worked, getting 78% of its take there, a series high]. While the previous four bounced around the States, it always felt reasonable for McClane to flash his badge and act like a bad-ass, because he was defending his homeland. Here, not so much. 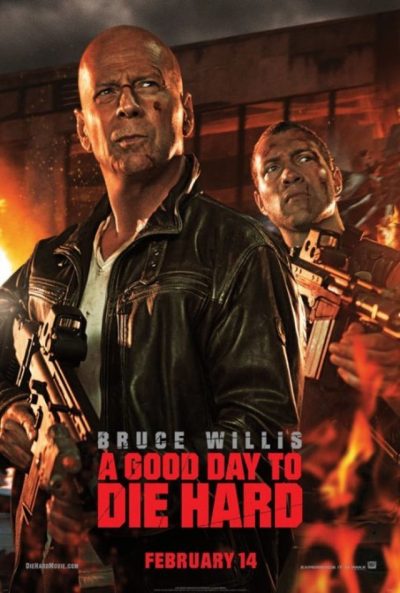 McClane is instead in Moscow after his son, John Jr, (Courtney), gets arrested for attempting to assassinate government whistleblower Yuri Komarov (Koch), and our hero seems curiously unsuited for subsequent developments. These include John II and Yuri escaping their trial, his son being a CIA spy, and rather a lot of Russian being spoken. You think they might have learned their lesson from #4, where the relationship between John and his offspring was the weakest part of the film – so weak, I completely omitted any mention of it from the review. The male spawn of McClane’s loins is no better. All he adds is the opportunity for pointless bickering. I haven’t been so annoyed by an action hero’s child since season two of 24.

It’s a shame, since the start is quite awesome. After Komarov and J.Jr are broken out of court, there’s a long, spectacular and ludicrously damaging chase sequence through the streets of “Moscow” [not actual Moscow: Hungary stood in for Russia]. Even if McClane Sr. emerges virtually without a scratch – in sharp contrast to #1-4, where his damage marked the timeline – it’s as good as any I’ve seen lately, and left me wondering where the hell the film could possibly go from there. Unfortunately, the answer was: steadily downhill. Nothing the rest of the way came even close in terms of set-pieces, and the gaps between the giant fireballs were filled with an apparently disinterested Willis going through the motions, when not arguing with his son in a way better suited to an episode of Chrisley Knows Best.

Having watched all five films in five days, it’s startling to see how far the franchise has fallen – albeit over the course of a quarter-century. We had an original where everyone was smart, complete with subtle political undertones, one of the greatest movie villains of all time and lines so sharp, you could cut yourself on them. We end (for now), having sunk into a completely generic plot, with a setting which could equally be any foreign locale, containing dialogue fresh from the Script-o-Matic v1.1, and bad guys straight out of foreign casting. If this is what we can expect, I couldn’t care less if we get any more, though it would be a sad end for one of modern cinema’s most well-loved characters.