The second in Aragão’s trilogy (thus far!) of rural Brazillian horror flicks, this comes between Night of the Chupacabra and Mar Negro, both chronologically and in terms of quality. It likely has more in common with Mar, both being zombie flicks, and both start in similar fashion too, with fishermen encountering something nasty lurking in the waters. This, however, is much more a straight zombie flick, rather than the outlandish and wonderfully surreal Lovecraftian nightmare which was Mar. 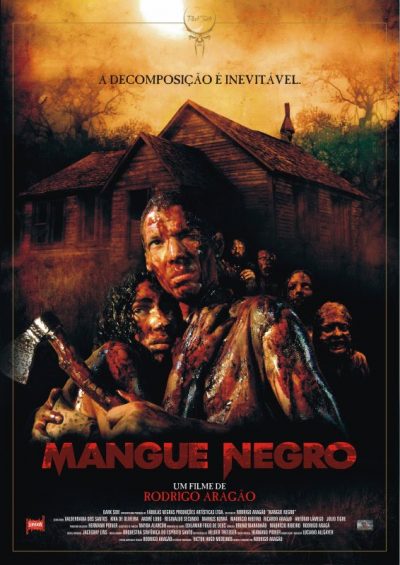 Its original title translates as “Black Mangroves”, and in terms of reflecting the content accurately, that title and the English-language one are both in the right area. The setting here is the mangrove swamps somewhere in Brazil – could be some off-shoot of the Amazon – which form a labyrinthine maze of trees and quicksand of unfathomable depth, capable of trapping the unwary, never to be found again. Some locals eke out a precarious living, catching crabs, but increasing levels of pollution are making this even less tenable. Things get worse still when the bodies of those lost in the swamp start to surface, hungry for flesh.

The hero is Luis (Dos Santos), a meek and mild-mannered local who has a crush on the beautiful Raquel (de Oliveira), yet has never plucked up the courage to confess to her how he feels. Courage will certainly be needed if they are to survive this night – not least after Raquel is bitten by one of the creatures. Luis is more than aware of what that means, and seeks help from local healer, Dona Benedita (Lobo), who advises him that the poison from a species of puffer-fish, which will trigger an artificial zombie-like state, is her only hope. Luis bravely ventures into the infested mangroves, and teams up with local fisherman, Agenor (Konká), to try and find the cure Raquel needs.

This makes for slow going in the opening sequences, almost like the viewer is wading through thigh-deep mud as well. The main problem seems to be the film’s inability to pick a character and stick with them. Things open up with Agenor, who then all but vanishes from the plot for close to an hour, as the focus switches over to Luis, before moving on to Raquel, and I was left wondering who was intended to be the central character. Once it settles down on Luis and his narrative, things improve significantly – and it doesn’t hurt that the gore, guts and sundry muck start to fly in copious quantities around the same point. From then on, things don’t let up much, as the survivors try to make their way through, and eventually out of, the area of infection.

Aragão is clearly making headway as a film-maker, especially in the area of pacing: Chupacabra took even longer to get going, and he continued to improve in Mar, which was genuinely interesting to watch, even before the mayhem kicked off. The technical aspects here are also a notch or two up on its predecessor – or, at least, seem that way, with the copious amounts of muck likely helping conceal any limitations. I’m curious to see where he goes next, especially if he comes out of the swamps which have been his home to this point.