This is an absolute textbook example of how to assemble an action film, on both the simple and more complex levels. For the former, it’s pitting a hero against a villain, and making sure that both are as memorable as possible. Yet there’s an enormous amount of craft which goes into every other aspect as well, and this is evident here, from the music (chunks of which, including its use of Ode To Joy, were inspired by A Clockwork Orange, of all things) through to providing a supporting cast that can buttress both protagonist and antagonist, helping elevate the results to the level of classic cinema. 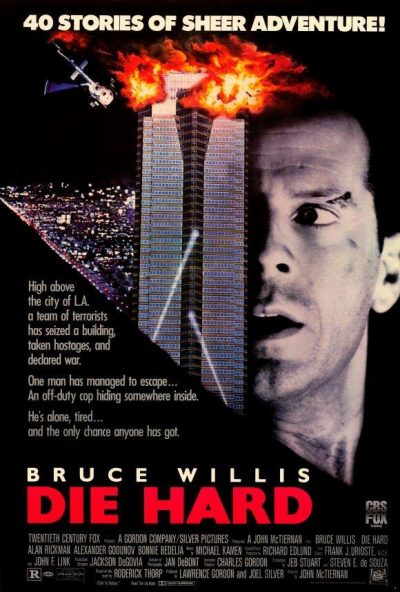 It’s often forgotten that Die Hard was based on a novel, Nothing Lasts Forever by Roderick Thorp. He wrote it following a dream he had after watching The Towering Inferno; like the film, it takes place on December 24th, though the hero in the book is visiting his daughter at her office Christmas party, not his estranged wife. The terrorists are changed too, being genuinely political, seeking documents which would exposing the company’s association with a Chilean military junta, and the novel is generally significantly darker in tone than the movie. For example, though Gruber dies by falling from a window in both, the book has the villain pulling the hero’s daughter with him.

At the time it was made, Willis was known almost entirely for his work in Moonlighting, having only played lead roles in a couple of relatively minor features, Blind Date and Sunset. But Fox had run through its A-list without finding anyone willing and able to take on the role, so gave Bruce $5 million, a remarkably high price at the time for an actor with such a short track record. It wasn’t enough for Willis to surrender his day job. For part of the shoot, he ended up filming Moonlighting during the day, then going over to the Die Hard set at night for his scenes there.

Even less experienced in movie-making was Rickman, who had never appeared in a film before; he had done some TV, but was mostly a stage actor. The producers found Alan through his Broadway portrayal of Vicomte de Valmont in a Royal Shakespeare Company production of Les Liaisons Dangereuses – I’d love to have seen that. There’s absolutely no doubt in my mind that Rickman makes the film: his Hans Gruber is arguably the best screen villain of all-time, being smart and utterly ruthless. Yet, he’s highly charismatic, and the audience is made to feel a sneaking regard for him, not least when he kills off the film’s most annoying (entirely by design, I should stress) character.

The chess match between these two is what drives the film, and is all the more remarkable for them only having a couple of scenes together in person. Most of their communication is instead over the radio which McClane takes from a dead terrorist. Gruber tries to provoke him with barbs about cowboys, a jibe which the hero embraces wholeheartedly, replying with the franchise’s most iconic line, “Yippie ki-yay, motherfucker.” In just three words – a throwaway phrase Willis used to try and crack up the crew – he spans the entire history of action heroes, from Roy Rogers to Arnold Schwarzenegger.

Among the film’s many remarkable facets are how little it has dated. The only bit which truly belongs to the 80’s is the limo McClane takes from the airport: the chauffeur proudly announces it as having “CD, CB, TV, telephone, full bar, VHS,” before slapping an audio-cassette into the sound-system. Everything else could easily be the here and now, from Gruber’s sharp Euro-suit to McClane’s increasingly distressed vest. The action scenes are no less pristine, with an impeccable combination of physical effects and model work that impresses on every level, and no less almost thirty years on.

But it’s all about the hero and villain. McClane is a reluctant everyman, who just wants to have a nice Christmas at home with his family: “Come out to the coast, we’ll get together, have a few laughs…” Initially, he simply doesn’t want to get involved. It’s worth noting he spends much of the first half trying desperately to get external help, and only when that fails, does he become committed to direct action to save his imperilled wife. When he does, though… McClane is an unstoppable force of nature, who may take increasing levels of damage, yet continues to chew up and spit out terrorists, on his way to the entirely satisfactory confrontation with Gruber.

For a 132-minute film, there’s a remarkable lack of slack. Even the opening reel, before a single shot has been fired, does a slickly-polished job of setting up all the characters (including Mr. Immensely Annoying!). And once things kick off, events bounce back and forth between inside and outside the building like an exhibition tennis match between two masters. Scripts, direction, production values and performances all mesh together into a whole that may never be matched. For if Die Hard is not a perfect action film, I can’t think of one better fitting that label.

[November 2008] Elements of this have dated significantly in the twenty years since it came out. Back then, you could take a gun on a plane and smoke in an airport, while gas was less then eighty cents per gallon. Fortunately, none of these are in any way relevant to the story, and everything else remains one of the most-perfect of action-movies. Even after the whole “Die Hard in a [fill in the blank]” genre has been done to death, the original still comes up fresh, new and more entertaining than the entire career of Steven Seagal. And, it has to be said, a good deal better than the three sequels.

The plot is perfectly fitted together, with a storyline so simple that it requires little or no explanation: the Western motif (“yippie-ki-yay” and Roy Rogers) is entirely appropriate, with its story of one man (Willis), alone, against the bad guys. There is no middle ground here: Hans Gruber (Rickman) and his men might as well be wearing black hats. But it’s perhaps Rickman who is the fulcrum upon which this film hinges, the greatest in a long line of British actors (whether adopting funny accents or not) in order to play memorable screen villains. What’s more remarkable is that, in Die Hard, he and John McClane don’t get to confront each other for the first 90 minutes or so, just sneer via walkie-talkie. But it’s no less tense for that, as our hero confronts and dispatches minions, using cunning as a force multiplier against vastly superior numbers.

Credit must also be given to Michael Kamen’s stirring score, which mixes Beethoven with Christmas standards to stirring effect, and the miniature work on view here is outstanding: the explosion after McClane drops the C4 into the elevator shaft is one of the most impressive in recent action cinema. If the phrase “never a dull moment” referred to any film, this is it, despite the body-count remaining flat-lined at zero for the first 20 minutes. The script is sharp, all the characters – even the minor ones – are genuinely just that, characters, rather than devices for hanging plot points, and it’s an absolute classic of the genre, no matter how many times you may have seen it. A+