This anthology follows on directly from the events of Horrortales.666 Part 2, with a burglar (Joel Wynkoop) still trapped in a house by dark, malevolent forces (Catherine Wynkoop), and made to read horror stories, because… Well, I guess even dark, malevolent forces need a hobby. And, to be honest, the more torment this thoroughly annoying criminal faces, the better for me. I suspect Wynkoop playing him as incredibly irritating and whiny is the point. Still, you may be glad when this particular horror host makes way for the stories. I must confess, I did laugh like a drain at the end: just when he thinks he has escaped, they (literally) pull him back in…

There’s less messing about here than in part 2, which is good. It only takes a couple of minutes before we’re into the first story proper, He Who Laughs Last, though it’s so short, things finish almost before they have got going. Somewhat confusingly, it also stars Wynkoop and his wife Catherine – took me a while to realize they were playing different characters. This is followed by Death is the Only Option. To be honest, this didn’t feel particularly like horror, and was probably the least interesting story – so its relative brevity was a relief. 25 minutes in, and we were already through two installments? Definitely not hanging around here. 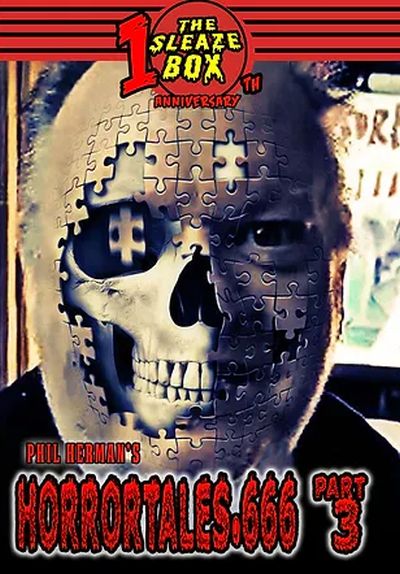 Devious Stratagems is the longest story here, by quite some distance, and is a bit of a mixed bag. The plot is murky, especially with regard to the character relationships. However, always good to see Debbie D, here playing a woman in a dangerous relationship. And we certainly see her, if you know what I mean, and I think you do… I think my favourite story was The Vessel, about a vase which contains the spirit of a malicious entity. In some ways, it’s your usual possession and exorcism story. Yet it has a twist, in that the heroine, Ellen (Hamilton) is deaf, so the story unfolds largely in subtitled sign-language. This is the kind of inclusivity I can get behind, because nobody makes a fuss about it, and nor does it interfere with the story.

I also quite liked the final part, Victoria, which adds an international flavour, coming from Uruguay. A simple tale, about a starving vampire (top), it does what it needs to, then gets out of the way. All told, I think this third installment works a little better than Part 2. While not containing anything as batshit crazy as its predecessor’s psycho, tinsel spurting Santa, this is made up for in better pacing. There remains some sloppiness in things like misspelled captions, and the host, too often, is still like nails on a chalkboard. Yet I cannot deny, the set up for (the inevitable) Horrortales.666 Part 4, probably a.k.a. Horrortales in Space, has me sneakily looking forward to whatever microbudget joys it may hold.

The film is released on October 15, and is available to pre-order here.