The zombie movie has often been the entry point for micro-budget horror film-makers. The likes of Zombie ’90: Extreme Pestilence and Zombie Genocide are examples illustrating the concepts. All you need is a camera, some red corn syrup and a bunch of more or less pliable mates, and there you go. Plot is optional, since they all have the same survival-based story, more or less. You can either stick with that, or look to add your own spin, that will make it stand out in a crowded field. Carter does a fair bit of that here – though not always in a positive way.

This particular zombie apocalypse has particularly affected women, leaving the survivors 99% male, and living in fear of the “rottens”, as the infected are called. Leader of one group, Jeb (Camp) has been promised supplies if he can bring a breeding partner to a local warlord. The only one he knows is Emma (Miracle and Lightford – we’ll get back to that), the daughter of Glenn (Guerrero), who live on their own. It quickly becomes clear capturing Emma won’t be easy, but Glenn is injured in the process, and Emma sets out to find the only doctor in the area. Jeb has far from given up, however, and successfully abducts her. She still has friends, however, who decide to release Jeb’s stockpile of rottens as a diversion, during which they can rescue Emma. 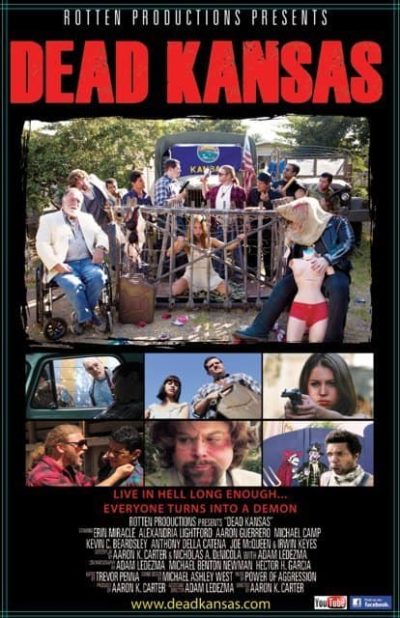 It was originally a five-part web series, and the joins are still there, with the feature version being divided into chapters. It was shot over a long period, and that’s why there are two women playing the lead role, as the initial incumbent became unavailable. Carter went right on shooting with a new actress, and the film never breaches the topic. This is either utterly insane or complete genius. I’m not sure which. At the other end, probably the most memorable element is the lack of zombies. Oh, they exist, yet are depicted almost entirely in b&w shots from the zombie’s point of view. This smartly limits the need for make-up and other stuff costing actual money.

However, the film loses focus after the capture of Emma, diverting on to two people we know too little about. Consequently, we cease to care, even if one does look like a hippy version of a young Colonel Sanders. They’re also examples of the inevitable curse of this genre: amateur actors, acting amateurishly. Glenn, the two Emmas and Jeb (top, who looks like a post-apocalyptic version of Chris Jericho) just about pass muster. Beyond them, though? Hoo-boy. There are a couple of honourable exceptions. Ben Woolf, who was Meep in AHS: Freakshow, has a small role as leader of another survivor’s group, which would have been nice to see expanded.

They say the only way to make a good movie is to make bad ones first, and make no mistake, there is significant room for improvement, almost across the board. There’s no doubt this is a throwback to a time where the genre didn’t feel like it was beating an undead horse. However, the basics are sound: the story is interesting, the audio crisp and at 63 minutes, it does not waste time. You’d be surprised how few first-time efforts pull off that trifecta.

This and An Hour to Kill are available on a double-bill DVD here.