I was intrigued by the concept of a Swiss disaster porn movie, which is more or less how this was promoted. I guess that is indeed what it is, in the sense that you get to see insurance companies having meetings about how to handle the disaster, and whether they can approach the federal government for a bail-out. What could be a more Swiss approach to disaster than that? On the other hand, if you are expecting wholesale destruction of national monuments – the Toblerone factory, I guess – you are going to be very disappointed. For this is disaster movie as a metaphor for the country’s state of mind.

The threat comes in the form of an unprecedented storm cloud, which appears out of nowhere in the middle of Switzerland, and expands to loom over the entire country. Except, no further: it stops at the borders. To be clear, it never particularly does anything of much note, and the makers are supremely and patently disinterested in the physical effects of the phenomenon. It could just as well be a heatwave, impending meteor strike or alien invasion, it doesn’t matter. What they want to explore is people’s reactions to it, at the small-scale level. No Presidents or astronauts will be found saving the world here. It’s the apocalypse (more accurately, the lead-up to it), as experienced by a football fan, beat cop or taxi driver. 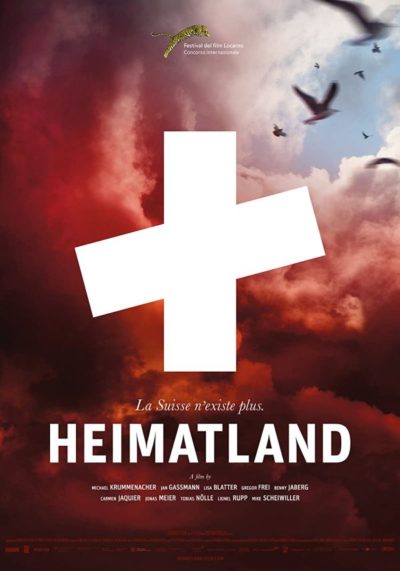 There’s nothing wrong with that as a concept. It humanizes the disaster, and sets things in terms to which the viewer can (hopefully) relate. This is the same approach taken by Don McKellar’s poignant Last Night, which included a gas company employee (played by David Cronenberg), spending his last hours calling up customers to thank them for their business. In the early stages, this has some similar success, most of it in the little things. For instance, a supermarket manager stoically reminding a cashier about gift cards, while a near-riot of stockpiling customers besiege her till. Or the football fan, seizing the chance provided by a power cut, to light triumphantly the flare he smuggled into the stadium.

The different stories overlap rather then mesh, probably a result of the ten different directors. I’m sure there was a reason for this approach. It’s not clear though, especially as there’s no obvious demarcation in terms of styles. The impact gradually fades the longer this goes, with the metaphor becoming steadily more heavy-handed, and consequently, far less interesting. For instance, the Swiss try to flee into the European Union, yet are turned back at the border – only the Croatian taxi-driver (Ristemi) is allowed out. Take that, you insular yodelling bastards! It’s kinda odd to see a supposedly peaceful (or “placid”, if you’re less charitable) country making a film which ends up feeling full of self-loathing. Considering the Swiss GDP is top three in the world, it all feels rather too much like a feature-length version of that ‘First World Problems’ meme.