Oddly, the film print goes with a title of THE Great White. That this mind-numbing nugget of near irrelevance is the first sentence of my review, tells you all you need to know. It’s still probably the most memorable thing this has to offer, which pits a five-pack of bland and/or unlikable characters against a pair of unconvincing sharks. Maybe the fact there were two is what caused the definite article to be dropped. Mind you, a double helping is still disappointing. “They’re hunting in packs,” intones Charlie (Jakubenko), a marine biologist turned charter pilot, and shark attack survivor. Except this pack numbers just the two. New rule: it’s not a “pack”, if there aren’t enough members to legally form a riot.

Charlie and wife Kaz (Bowden) have been hired by Japanese couple Kaz (Tsukakoshi) and Joji (Kano), to take them to a remote beach and scatter the ashes of Kaz’s grandfather. Through a series of unfortunate events, too tedious to detail, the party plus chef/token indigenous person Benny, end up drifting in an inflatable raft, with no hope of rescue. The shark which was one of those unfortunate events is on their trail – and, as noted above, it has brought a plus one to the buffet. Though if the inhabitants of the raft are as hard to swallow as their dialogue, the predators are in for a very nasty case of indigestion. 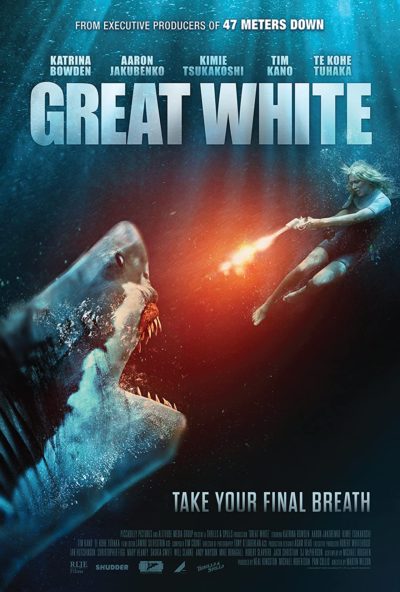 There are few surprises to be found here at all. Survivors can be predicted with close to 100% accuracy, and the order of their demise is similarly easy to guess. For instance, Kaz is harbouring A Secret from Charlie, and its revelation provides her with a suit of +5 vs. sharks plot armour. Similarly, Joji seals his fate by being rude to Benny. The main divergence from traditional shark movie protocol is how damn long you have to wait for someone to turn into lunch. After the traditional opening, it’s close to an hour before anybody else gets nibbled on. That’s far too much time spent with these irritating people, who can’t even hunker down inside the raft like sensible individuals. Instead, they manufacture convoluted mechanisms by which they can fall into the ocean, and thus into peril.

The makers need to take a lesson from Shark Bait, about how to use annoying characters to your film’s advantage. Instead, there’s precious little joy or satisfaction to be had from their demise, for these take place largely in murky near-darkness, and edited poorly to boot. This may be because the main example of daylight interaction, when the shark decides to abandon its usual diet of seal for seaplane, is well short of competent. Burying all subsequent attacks is probably sensible: they should have done the same thing with the script. When a movie has to tout itself as being from the executive producers of the 47 Metres Down franchise, you should set your expectations accordingly. You will still likely end up disappointed.