I guess we saved the most fun for last, though it did not exactly get off to a promising start. Within 90 seconds, we had already had enough of the insufferable, young, attractive, American abroad, douchebags, and were firmly part of Team Shark. I mean, we were getting T-shirts printed up and everything. Nothing less than an 80% mortality rate was going to be acceptable because, as ever, in the group of five, there was one who seemed decent. Here, it’s Nat (Earl), who at least has the decency to furrow her brow in a disapproving manner, when her friends steal a pair of jetskis. Doesn’t stop her from hopping on board for the subsequent joyride though. 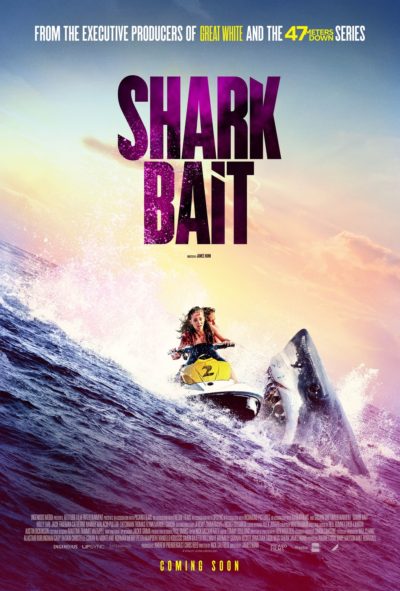 Karmic justice is served quickly. A crash leaves both craft disabled, and one of the group with a gnarly open fracture of the leg, bleeding profusely into the ocean. I’m sure you can more or less figure out the rest, and why the distributors wisely changed the title from the damn awful original one. Expect more or less all the clichés of the genre: no cellphone reception, failed attempts to go for help, more poorly-considered choices, etc. Sure, it’s obvious and hardly novel. Yet at the risk of stating the obvious: this is a killer shark movie. We’re here to feel intellectually superior to these people, and watch them get eaten. On that basis, this must be considered a resounding success on both fronts, predictability be damned.

It helps that this is probably the only film we’ve seen this week where people actually act like they are being devoured. This actually begins with Mr. Broken Leg, who sells his injury, delivering the energetic enthusiasm of someone making his debut in the WWE. Naturally, he becomes the first to go down the throat, which does at least save the film from the modern cinematic capital offense of having the black guy die first. None of which really count as spoilers, since they are both signposted well in advance. There is also some additional guilt, in which we discover Nat’s boyfriend has been a bit of a slut. Cue more furrowed disapproval, and naturally, eventual karmic retribution with a fin, swimming up for dinner.

This is also about the sole entry where a shark attack victim looks like they have been on the receiving end of gnawing. You’ll usually get a bit of blood, but very little in the way of actual mutilation. Here, one guy survives his encounter and is very much the worse for wear. Though, as shown top, others are even worse off. It’s not quite the hardcore splat-shark action, for which I still yearn, yet it’s at least in the right direction. Director Nunn previously did the awesome One Shot, which I named the best movie of 2021. This isn’t at the same level, yet I was genuinely entertained for the whole time – even the early hate-watching – and I’m happy to honour it as the best of Shark Week 2022.