This is definitely a film where the trailer doesn’t do it justice. Indeed, I didn’t even realize the film’s selling point until about five minutes in. Before we get to that, let’s dispose of the plot. [For to be harsh, it should be disposed of…] Jake Harris (Adkins) and the rest of his SEAL team arrive at a black site on an island, along with analyst Zoe Anderson (Greene), to pick up terrorist suspect Amin Mansur (Elgadi). He’s suspected to know the location of a dirty bomb in Washington, due to go off imminently. But before they can leave, the site comes under attack by a group of mercs, who appear to have brought an infinite spawn point in their truck, and are intent on making sure Mansur can’t reveal any information. Harris and crew must fight a rear-guard action, as they wait for help that may or may not arrive in time. 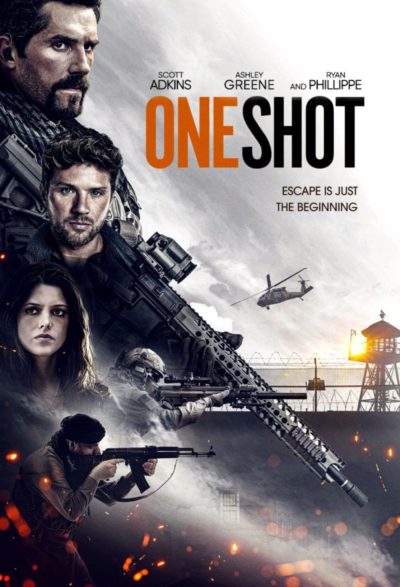 Yeah, so what? Nothing new there, and to be honest, the characters are kinda shallow too, by standard cinematic measure. But, as mentioned, a few minutes in, I noticed we’d followed the SEALs and Anderson off their chopper, through the base, to the office of its CO, Jack Yorke (Phillippe), and out to the interrogation chamber where Mansur was being held… without a single cut. I suddenly realized, the title was not a reference to Mansur being the sole chance of stopping the bomb. It was a statement of cinematic intent. This film is crafted to look like a single, continuous take, beginning to end.

Now, this is not such a remarkable thing these days, in the wake of 1917, though Nunn has said his idea pre-dated that. This is also one of those edited to look like one shot, rather than a true example, like Victoria. However, the execution is near-impeccable. Perhaps it’s the fact this is an action movie, with many things going on to distract, but I truly couldn’t see the joins. There were clearly a lot of genuinely long, long takes, and those are rare in the genre. Tony Jaa’s The Protector is well-known, and we did review Crazy Samurai Musashi, with its hour-plus shot. But the way this is assembled manages to be particularly impressive, without being distracting. You’re embedded in the action, not wondering about the technical elements. That’s a balance even 1917 struggled to find. Bonus points to Gunn for not going all shakycam on us either.

It’s a perfect vehicle for Adkins’s skills. Things likely peak with the sequence where Harris attempts to reach the base’s communication centre, which requires multiple displays of his hand-to-hand abilities. In terms of choreography, it beats anything Spielberg delivered in West Side Story (and without all the virtue signalling too). But in the end, it was just glorious to see an action movie that was, entirely deliberately, the very antithesis of the lazy, “edited to fuck” garbage which has become common in Hollywood. All the better as a result, this is up there with Avengement (2019) as the best work of Adkins’s career. Well, at least until his appearance in John Wick 4 next year.