This was my first Adkins star-vehicle, and boy, if it didn’t blow my socks off. It’s rare for an action film also to have a well-written script and performances which deliver rounded-out characters, as well as copious bone-crunching action, yet this delivers on just about every level. Though I am still trying to work out what the hell “avengement” means, and why the makers apparently bothered to make up a generic-sounding nonsense word. There were surely plenty of perfectly acceptable ones they could have used. 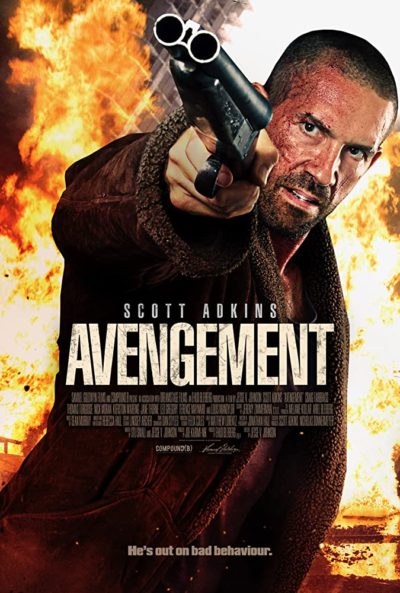 Former boxer Cam Burgess (Adkins) escapes from his prison guards when on a brief furlough to see his cancer-stricken mother, and heads for the private club where the minions of his brother, Lincoln (Fairbrass) hang out. Holding the customers and barmaid hostage, as they wait for Lincoln to arrive, it becomes apparent that Cam is on a mission of vengeance, Lincoln having put a hit on his brother in jail, for having grassed on the highly-dubious family business. But the fact Cam survived – albeit at the cost of his teeth, and much of the skin on his face – shows he has the skills to pay back those who betrayed him, and anyone who gets in the way.

Credit first to the script, by Johnson and Stu Small, which largely unfolds in flashback. This can often be a bit of a cheat, but here, it’s played honestly, and to good effect, filling in the reasons for Cam’s actions. The dialogue is also cracking (“Looks like someone set fire to your head and put it out with a shovel”), often dripping with sarcasm and reminiscent of early Guy Ritchie. Extra amusement is provided by the Netflix subtitles and their struggle with the heavily-accented colloquialisms e.g. “backside” instead of “boss-eyed” and “tough” instead of “Taff”. Then there’s the actors, who all do their lines justice, with special nods to Lincoln’s lieutenant Hyde (Moran) and brassy barmaid, Bez (Kierston Wareing), called that because… Never mind. The film explains it better than I could.

These, however, are all bonuses, because you are here for the arse-kicking, which is almost non-stop, and very well-staged. The British setting reduces the need to explain the lack of fire-arms, though these do show up for a couple of high-impact moments, the sawn-off shotgun in particular. Instead, it’s mostly fisticuffs, with the intensity amped up to eleven, and Cam typically fighting off multiple opponents, more or less at once. About the only real one-on-one battle sees him going up against the corrupt police officer who triggered the hit, and this makes some sense. Cam is painted as such an unstoppable force, no single person could realistically pose much of a challenge. Or indeed, no single army.

Still, despite his invulnerability, if there has been a better British action film, I’m hard-pushed to think of one. Maybe some of the best 007 movies, though they are really almost a genre of their own. This is top-notch stuff.