What’s interesting about the Undisputed series is its switching up of protagonists. In the second film, Boyka (Adkins) was actually the bad guy, who had his leg broken by George “Iceman” Chambers in the film’s climax. But he was something of a heroic antagonist: Boyka had beaten Chambers earlier on, but insisted on a rematch after discovering his opponent had been given spiked water to drink. Still, there can’t be many franchises where the villain in one entry becomes the hero of the next. Yet, here we are, with a humbled Boyka now limping around the bowels of his Russian prison, cleaning toilets and slowly rehabilitating his leg. 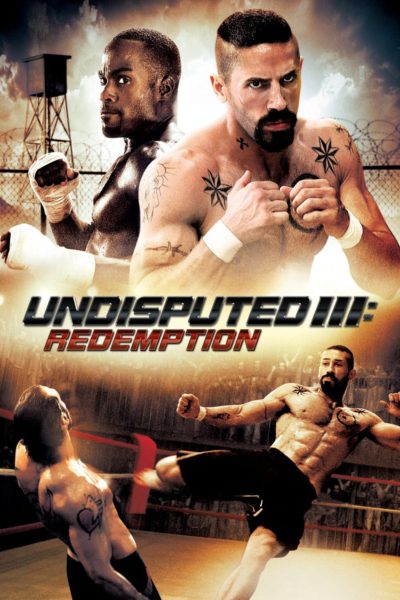 That accomplished, he becomes his country’s representative in the Prison Spetz Competition (PSC). This pits the eight best jailed fighters from around the world in a tournament, with the winner gaining their freedom. It’s organized by mob boss Gaga (Ivanir), but the hot favourite is Colombian champion, Raul “Dolor” Quiñones (Zaror). Indeed, the fix is in once more to make sure he prevails and the right bets get paid out. To make sure Quiñones wins his semi-final, his opponent, American “Turbo” (Jenkins), for whom Boyka has developed a grudging respect, gets a pre-bout beatdown. This offends Boyka’s sense of fair play, and he helps Turbo to escape rather than face death in a bout he can’t win. This sets up the inevitable bout between Russia and Colombia as the PSC final.

It’s almost all thoroughly predictable, and feels like a throwback to a simpler time when martial arts films had plots that would barely trouble the edges of a beer-mat. The ambition there is low, and the film carries out the task of converting Boyka into the hero, largely by ignoring him ever having been anything else. Still, I can’t deny it worked for me – my not having seen the first Undisputed and finding the second not very interesting probably helped make the transition here. The relationship between Boyka and Turbo is quite nicely developed though, going from icy to genuine friendship and loyalty.

You are not here for the touching emotional drama though. You are here for merciless beat-downs, and the film delivers there, with excellent choreography. I must admit, I could probably have done without the frequent changes in frame rate: sometimes it feels excessively undercranked, feeling sped-up to the point of cartoony, which I’m not a fan of in “realistic” fights. Then Florentine will switch to slow-mo, and in general I felt this technique made it harder to appreciate the participants’ true skill. I also though the best fight was the one outside the ring, whee Boyka and Turbo took on some guards; that offered a bit more scope for invention. However, while this is one of those films which may not set out to do much, it does so with solid competence and delivers a more than adequate amount of entertainment. It’s certainly easy to see why it kicked Adkins’s career on an upward trajectory.