Or “Poor Decisions: African Edition”. For this is the misadventures of the Halsey family, whose safari-park jaunt goes wrong, in just about every conceivable way. Mostly, this as a result of a series of idiotic decisions by patriarch Jack (Winchester), beginning with his cost-cutting decision to skip hiring a guide. Then add letting teenage son Noah (Johnston) drive, and getting between Mrs. Rhino and her calf. The stage is thus set for them to be stranded off-grid, without water (due to their eco-conscious glass bottles being broken in Rhinomageddon) and with Jack’s diabetic wife Lauren (Stamos) heading towards a coma. Thrown in predatory animals and poachers, though the biggest threat might be the family bickering each other to death. 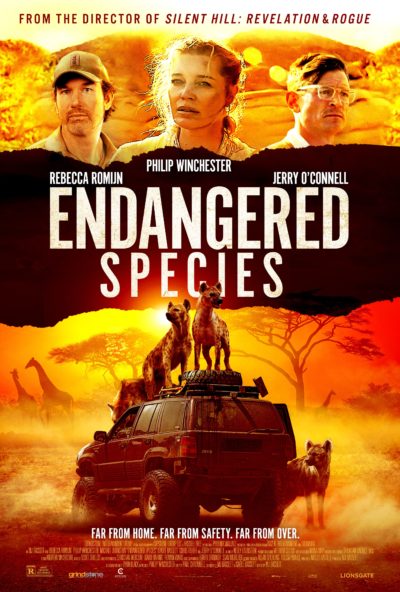 I was somewhat prepared for the idiocy here, having seen Bassett’s previous African human vs. animals flick starring Winchester, Rogue. This starred Megan Fox as a “battle-hardened mercenary”. I’ll repeat that. Megan Fox. Battle-hardened mercenary. On the basis of it, I was ready and braced for whatever stupidity the script could throw at me. Chris, not so much. 38 minutes in, she had returned to scrolling on her phone, after having pledged her support firmly for Team Hyena. I can see her point. The Halseys are a grating bunch of dysfunctionals, who all have issues, none of which are endearing. The only half-sympathetic character is Billy Mason (Chris Fisher), the hippie boyfriend of daughter Zoe (Bassett, the director’s daughter). He gets pounced on by a leopard, just as we were warming up to him.

If you can get past the unlikable people, this is at least somewhat fun, with the African scenery well-photographed. You have to be ready for animals that arrive and depart in strict accordance with the film’s needs, rather than any biological imperative. The poachers, led by Jerry O’Connell (a long way from his Stand By Me days), are about the only threat to behave with consistency. Credit Bassett for that too, Rogue having had a similarly pro-wildlife message. Though here, this shows up in a very clunky fashion. There’s a coda where the Halseys fund rhino conservation (hang on – weren’t they in perilous financial straits?), followed by a Statement – capital letter used advised – from Bassett. If, after 100 minutes, you still need a wall of text to get your message over, there’s something wrong.

While frequently annoyed, I have to say I was never bored. The script does keep moving forward, and I didn’t find the CGI animals as actively bad as some reviewers (Bassett tends to keep them some way from the humans, which is likely wise). There is slight pleasure to be gained in seeing the whiny and entitled American family get put through the wringer, although the punishment here doesn’t match the degree of irritation for which they are responsible. The overall death-toll here would needs to be around 400% higher, in order for that aspect to be satisfactory. Nature here is just not red enough in tooth and claw.