This is a tribute to the Mr. Vampire series, with a number of the cast, including the two leads, having appeared in franchise entries. Chan, in particular, should be remembered as one of the duelling priests in Mr. Vampire 4. However, while those were a blend – sometimes uneven, sometimes wonderful – of action, horror and comedy, this does not possess much of a sense of humour at all. I mean, it largely starts with a suicide attempt by actor Chin Siu-ho (Chin), after his wife and son leave him. He’s rescued by Yau (Chan), another resident of the incredibly dingy Macao tower block in which this entirely takes place. 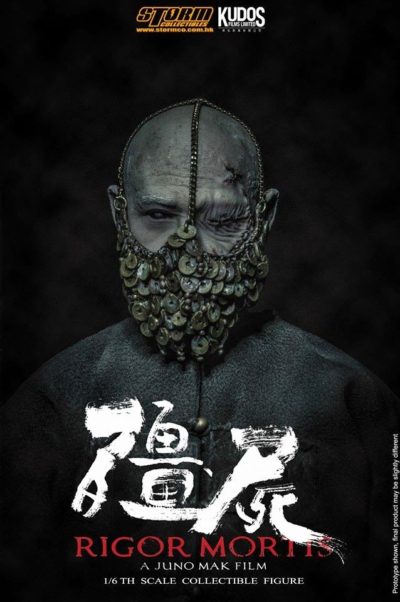 All I can say is, apartments must be very hard to come by there, since no-one even discusses moving out, despite the steady stream of extremely unsettling events which occur in the complex. It must be said, there may be a good reason for that. This is suggested in a twist at the end, which could be seen as a massive cheat, yet I thought was handled well enough to pass muster. Anyway, Yau is a Taoist priest who works as a chef at a restaurant in the building, and handles the various deceased entities who occupy the land. He fully expects to join them when he dies, saying “It makes sense to develop a good relationship beforehand”. Supernatural shenanigans escalate after the accidental death of one resident (veteran actor Richard Ng). His grieving widow (Pau) makes a deal with practitioner of the dark arts, Gal (Chung) to bring her husband back.

Naturally, this goes about as well as these things usually do, especially when the rules are not followed by the customer. Consequently, the building becomes home to a lot of pissed-off spirits and, eventually, a hopping vampire. With the reluctant help of Chin, who would rather be dead, Yau must keep everything in check and put the occult cork back in the bottle. There’s no doubt the monsters here are considerably more malevolent than the ones in the classic series, though a lot of the methods of dealing with them still work, such as the use of sticky rice. This definitely feels a lot looser in terms of plot. It all makes emotional sense, rather than logical sense, if you see what I mean.

Chan does what he can, but let’s be honest: he’s not at the level of Lam Ching-Ying, the original Mr. Vampire, and that’s what the film needs to be truly successful. The happenings here are so over the top, they need someone especially grounded to anchor proceedings. However, it looks peachy, and Mak demonstrates a crunchy appreciation for violence which likely exceeds anything from the original franchise. I’d recommend taking it as a giallo take on the concepts, one where style is perhaps of a greater importance than substance, and you’ll still have a worthwhile time. Though will likely leave very concerned about the real-estate situation in Macao.