I’m not sure quite when I first heard about the Church of the SubGenius. It may have been through their connection to Devo. I do know that I was clearly a fan by 1991, when I wrote about them – or, at least, my mutant take on them – in Trash City. But my heretical modifications were likely fine with the church elders, who not only tolerated but actively encouraged schism. If you don’t know what the Church is… Well, it’s hard to explain. It’s almost a parody of religious cults: their slogan, repeated often in this film, is “Fuck ’em if they can’t take a joke.” It incorporates a complex mythology involving their chosen saviour, JR “Bob” Dobbs, extra-terrestrials and the end of the world, scheduled to take place in 1998, and still celebrated by church members on July 5 each year. 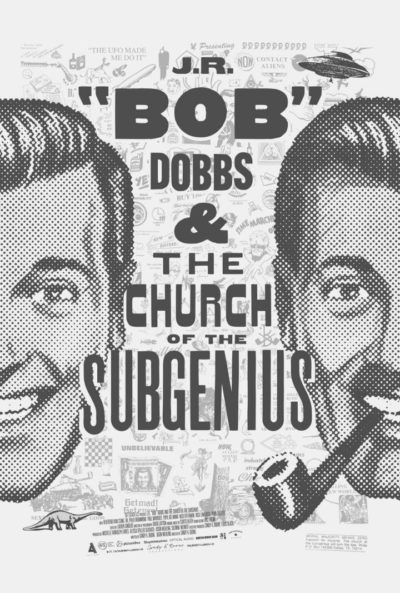 This doc traces the history of the group, from its founding by Stang and Drummond, in late seventies Austin, Texas. It seems to have begun almost as a coping mechanism for them as outsiders, only to discover [who knew?] that it was also of appeal to other outsiders as well. This was in pre-Internet days, but their pamphlets detailing the joys of Dobbs, “slack”, and the war against the Pinks, achieved wide distribution by mail. There were subsequently gatherings, known as “devivals”, including The Night of Slack in San Francisco, at which Dobbs was gunned down on stage by Puzzling Evidence, in a belief that all religions need to kill their deities.

Yet this also illustrates its darker side. By pushing the division of society into SubGeniuses and Pinks, and promoting disdain or even extermination for the latter, it foreshadowed things like the Columbine Massacre – an event I found still marked on SubGenius.com. These fractures have only got worse since: a recent poll showed 37% of college Democrats could not even be friends with a Republican. There was also those who simply didn’t get the joke, wanting to be members of a genuine cult rather than embracing the free-thinking behind it. And while some women members are interviewed, there’s no denying, the Church was very much a sausage-fest.

It’s a serious joke which ran its course, and I could probably have done without shoehorning in a Trump critique, which seemed tacked on to support Boone’s own opinions. In the poll mentioned earlier, only 5% of college Republicans couldn’t be friends with a Democrat. So who’s powering America’s partisan divisions again? And if there’s anyone who can’t “take a joke” these days, it would be those who want to dictate the limits of comedy e.g. “no punching down.” Just ask Dave Chappelle who that is. But as the study of how a cult can grow, beyond what its creators intended (requiring them, as Stang says, to “break character”), and a prank can mutate in ways the pranksters never expected, it’s a sobering exercise – albeit one with its fair share of levity, if not actual humour. It likely won’t convert anyone, yet if you already are an acolyte, you’ll find much to appreciate in the blanks this fills in.