If this is not as batshit crazy as the previous Aragão film we reviewed, Mar Negro, there’s still a lot to enjoy here. Once again, he’s planted firmly in the distant backwaters of Brazil, where getting to the city is a far-off dream, but bizarre threats lurk just beneath the surface. In this case, the focus is innocent herbalist Clara (Aragão, I’m assuming some relation of the director?). Coming home from market one day, she stumbles into possession of a mystical tome, the Lost Book of Cypriano. This book has great power. But as we all know, with great power comes great responsibility. 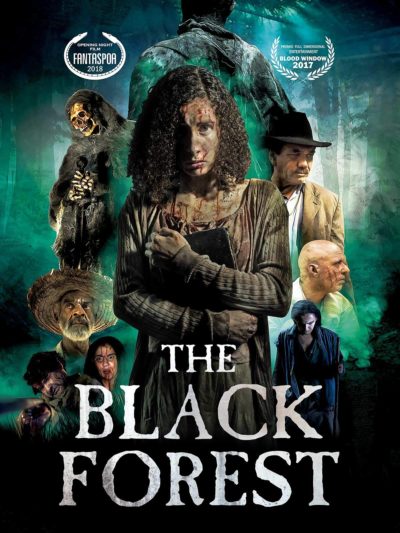 Clara isn’t very good at that aspect, probably due to her not having an Uncle Ben. As a result, before you can say “Does she weigh the same as a duck?”, she has been hounded out of her home by firebrand preacher, Francisco Das Gracas (Antune). The more Clara tries to fix things through occult means, the deeper a hole she digs herself. Before the end, she’ll be creating chicken homunculi, digging for fetuses in newlydeads, and sending the world to teeter on the edge of a demon-powered apocalypse. The moral of this story? Just say “No” to clearly dubious volumes of occult lore, kids. Especially ones written in blood, bound in human skin, or handed to you in the middle of the jungle by a dying albino (Walderrama Dos Santos, one of the Mar Negro stars).

It’s always a delight to see a setting like this which, while taking place in the modern day, is wildly different to life as we know it (see also Belaban Hidup: Infeksi Zombie). Even when the plot loses momentum, this is still interesting to watch, purely from an ethnographic point of view. Clara makes for a winning heroine too. In the big scheme of things, you can understand why she’s trying to do these things, beginning with the resurrection of her boyfriend, slain in a robbery gone wrong. Though kidnapping a local brat for human sacrifice, even if you subsequently have a change of heart and don’t go through with it, probably counts as a bad move in most societies.

This is probably the closest Aragão has come to the style of Brazil’s most famous horror export, Coffin Joe. Not least, the jabs at organized religion in the shape of the hypocritical pastor Das Gracas, and what may even be political subtext. It does come over as a but clunky, and the movie is better when finding its own route. For most of the film, it feels almost like a throwback to the sixties; it could have been an Amicus or Hammer product, concentrating as it does mostly on atmosphere. But the final reel has Aragão cutting loose in no uncertain terms and making up for lost time. The film then barrels towards an ending which reminded me of the original one from Army of Darkness. I suspect if anyone could remake that and do it justice, Rodrigo would be your man.