Make no mistake, this is a gimmick film – with the gimmick being a 75-minute sword fight, shot in a single take. How you react to that will almost entirely determine your feelings about the movie, since that’s virtually all there is. You get a few minutes on either end, such as a quick prologue, setting up renowned swordsman Miyamoto Musashi (Sakaguchi) against an overwhelming number of enemies. Then we’re onto the main course. Now, it’s not your typical cinematic sword-fights, flashy and stylized. If you want a comparison,  those would be Wrestlemania, while this is a Graeco-Roman Olympic tournament. 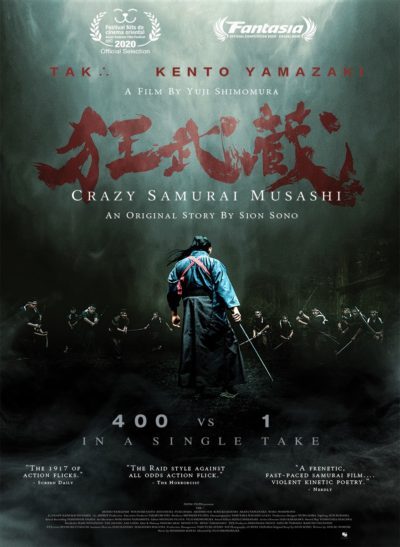 If you’re expecting, say, other Sakaguchi vehicles like Azumi, you will be disappointed – as quite a number of reviewers apparently are, calling it “boring”. We weren’t, just finding it a different kind of interesting. Actually, our background as wrestling fans may have helped us. Thanks to that, we have an appreciation for things like stamina and improvisation, not normally present in cinematic action, but clearly key components here. The hero has a near-perfect economy of energy, barely moving his sword to flick away attacks, with his own being the most direct route possible, striking like a cobra. Maybe not the most spectacular approach, yet it makes perfect sense when you’re mowing down hundreds of enemies.

Yes, they should all have simply rushed him at once. You’re not clever for pointing this out. Here, have a Dorito: I can only presume you’ve never seen a samurai film before, because that’s one of the conceits of the genre. This is not immune from those. Witness, on repeated occasions, the sudden decision by half a dozen of Mushashi’s attackers to run at him, one by one, with their swords high above their heads. It does not end well for them, obviously, being mown down with horizontal slashes to their torso like wheat. Yet Shimomura changes things up, going from rural to semi-urban setting, wide-shot to close-up, and even focusing on other characters occasionally – presumably to give Sakaguchi a breather – while maintaining the single shot. Early on, there’s a zoom-in to one minion’s back, and I thought this might be a 1917 like “fake take”. But if there were other joins, I couldn’t see them,

This variation keeps things more engrossing than I expected. Towards the end, he does seem to run out of ideas, with a particularly lengthy sequence around a gateway that does fall short in energy. The lack of any plot is also an issue; at the end, you’re really no further forward than you were ten minutes in. Given the “original story by Sion Sono” credit, I wonder what he did with the rest of the napkin. I would love to see a “making of” documentary, to provide some insight into the technical aspects. To what degree was the combat pre-arranged? How many takes were needed? What quantity of extras were present? I sense a fair degree of recycling, going by the occasionally obvious ways they roll off screen post mortem, and even the mechanics of that would be interesting. Considering everything, I’d say it’s certainly something worth seeing at least once,