You have to admire the sheer moxie of a low-budget film that’s trying to take on the Cthulhu mythos. Especially when, at the end, after generating an adequate amount of creeping dread, it brings out Dagon. Correct me if I’m wrong, but I was under the impression he was a deity, towering over pitiful mortals. The mere sight of him was sufficient to turn humans into gibbering wrecks. Here? Not so much. It’s basic, “guy in a mask” territory, and if quite a good mask, it is more Humanoids from the Deep than anything – not least, because he shows up to have sex with a human woman. Maybe that’s why he adopted the form. Yes, I’m probably going with that. Otherwise, there’d have been… issues. Involving splitting and sundering. 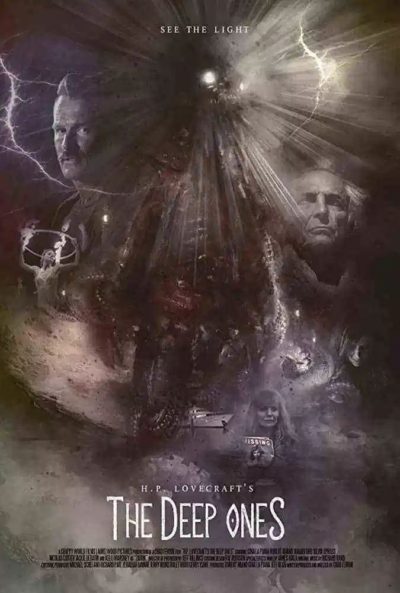 That’s definitely getting ahead of the film, which begins with married couple Alex (La Piana) and Petri (Urb), who have booked a week in a luxurious resort AirBnB on the California coast. On arrival, they’re greeted by the home’s owners, Russel Marsh (Miano) and wife, Ingrid (Spross), who is just about to pop. Initially, they are charming, but it’s not long before they begin to seem increasingly odd, e.g. showing up at six the next morning to cook breakfast for their guests. Ingrid feels not well, so begs off when invited to visit their new friends’ boat. Petri goes, only to be hypnotised by Russel. That turns out to be the tip of a creepy, unnameable iceberg, as the entire local community are in on the Dagon-worshipping cult, and have big plans for Alex in particular.

It’s basically Rosemary’s Baby with tentacles, which is not necessarily a bad thing. The scene where Petri gets put under the spell of Russel is particularly creepy, with tentacles coming out of Ingrid, from places no regular pregnancy should be sprouting them. However, it relies upon the usual problem, of people sticking around because it’s necessary to the plot, when any semi-sensible person would nope the fuck out of there. Nothing illustrates this better than Alex and Petri’s arrival at a party, where the locals already present greet them in unison. If that’s not a huge red flag, I don’t know what is.

This works best when generating a sense of unease, sometimes in surprisingly simple ways. For example, the local woman doctor, who pops by to check on Ingrid, is played by a man, in a way that’s convincing enough, yet still evokes an almost subliminal feeling of “wrongness.” The other performances are more functional than particularly memorable: Miano is probably the most outstanding, coming off as an eldritch version of Marshall Applewhite, founder of the Heaven’s Gate cult. It’s at the end where the film’s ambitions are most cruelly exposed to its lack of resources, and is a disappointing note on which to send the audience away. You know the saying. “Go big or go home?” The makers here should probably have done the latter.