Its odd to see The Anniversary was directed by the same man who just gave us Quatermass and the Pit, for two more radically different movies are hard to imagine. This is definitely far, far outside of what you probably expect from the term “a Hammer movie.” No Gothic castles. No dark sexuality. No monste… Ok, scratch the last. For there is definitely a monster present in this. It’s just one of the human variety.

The film is an adaptation of a play with the same name, written by Bill MacIlwraith, which opened in 1966 and had a long run at the Duke of York’s Theatre in the West End. Mona Washbourne, best known as housekeeper Mrs. Pearce in My Fair Lady, and who was also Frau Lang jn Brides of Dracula, played the lead there. Davis replaced her in the film, returning to Hammer after The Nanny. She initially declined the part, but a rewrite by producer-writer Jimmy Sangster got her on board. A number of the stage cast did cross over, including Hancock and Hedley. [The former would go on to take Davis’s role in a 2005 revival of the play].

Initially, the well-respected Irvin Rakoff, who had given Sean Connery his first leading role in 1957 TV play Requiem for a Heavyweight, was scheduled to direct. However, almost as soon as shooting started, a personality clash between director and star began to brew. Davis was unimpressed with Rakoff’s methods; he later said, “She didn’t want a director. She wanted someone enthralled to her.” A week into shooting, she demanded he be fired, and there was only ever one winner in that battle. According to Sangster, he was told by an executive at partners 20th Century Fox, “It’s not a Hammer Film. It’s not a Fox film. It’s a Bette Davis Film. She wants a director change? You change the director.” Rakoff was toast, and Baker was brought on board instead. He does a functional job considering the circumstances, though the film never sheds its obviously stagey origins. 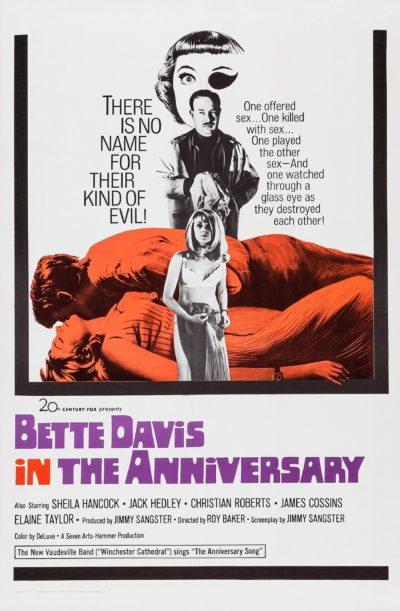 It’s the story of a get-together by the Taggart family, whose portrait can be found in the dictionary, next to the word “dysfunctional”. They’ve made their fortune in construction, largely by sacrificing quality for low costs and speed. The matriarch, widow Mrs. Taggart (Davis), controls her trio of sons with every emotionally manipulative trick in the book. They join their mother on the occasion of what would have been her wedding anniversary, and all three have secrets. The youngest, Tom (Roberts), has brought Shirley to meet Mom, who is unaware Shirley is both his fiancée and pregnant. Middle son, Terry (Hedley) has been convinced by wife Karen (Hancock) to escape by moving to Canada – yet hasn’t had the courage to tell his mother. And scion Henry? He’s Mummy’s favourite – and a transvestite, with an addiction to swiping women’s underwear off clothes-lines.

Mrs. Taggart gives absolutely no fucks and sports a selection of colour-coordinated comma-shaped eye-patches, the result of an accident caused by Terry as a child. Naturally, she uses this as another mechanism by which he can be held close. Basically, it seems she resents anyone, typically female, who she perceives as a potential threat to her close (creepily close, as in when she passionately kisses Tom) relationship with her sons. Shirley has absolutely no clue as to what she has landed in, but soon finds out, when the laser focus of the matriarch’s verbal abuse is turned on her. As Karen tells her, “She’ll find your weakness and she’ll drag it round the room in triumph.” [Weirdly, it turns out to be Shirley’s ears] Anyone stands against her at their own risk, though the sharp-faced Karen does so, much more so than any of the three boys.

It’s easy to see why the makers wanted Davis to play the lead, and perhaps why they were willing to sacrifice Rakoff on the altar of Bette’s ego. The dialogue might have been written for her, every syllable dripping with Alien-like acid, and delivered with intent, typically malicious and aimed to cut to the quick. That’s clear right from the start: in almost her first line, she responds to the bouquet of flowers Henry gives her with, “They’re lovely! Who died?”, immediately setting the tone for the rest of the movie. She’s amazingly cruel and vindictive. After hearing about Terry and his wife’s emigration plans, she convincingly fakes a phone-call that their children have been critically injured on the way to Karen’s mother, because she “wanted Karen to find out what it was like to lose a son.” I don’t use this word lightly, but what an absolute cunt. 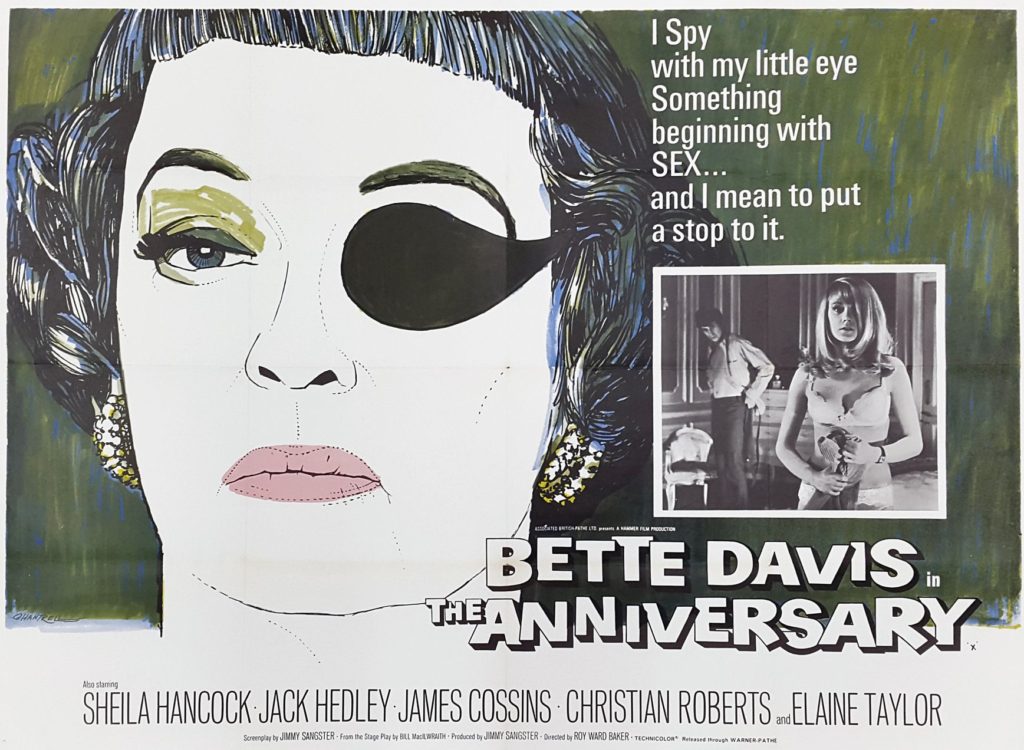 I’ll drop in a few examples of the sort of poisonous lines you can expect to hear; I lost count of the number of sharp intakes of breath which the dialogue provoked.

It’s certainly fun to watch Mrs. Taggart and Karen going toe-to-toe verbally. Though all the family drama does get rather wearing after a while, since everything seems turned up to 11 emotionally. There’s not much sense of development over the 94 minutes either. Shirley seems to grow a spine – yet the sight of a glass eye is then apparently enough to provoke hysteria and a near-miscarriage. It also lacks the traditional Hammer morality, in which the evil typically end up getting their just deserts. There’s an almost disappointing lack of payoff here. Overall, I would say it likely ranks about on a par with The Nanny, yet comes up short of Hammer’s other biddysploitation flick, Fanatic., as far as entertainment value goes.