“Who did the guy in The Wicker Man call?”
“No one. They burned him to death.”

The dialogue above comes about 45 minutes in, after we ourselves had been remarking on the increasing similarities to that film. For the movie itself to draw the comparison, could be a remarkably audacious attempt to acknowledge and defuse the sense of deja vu. Or it could be incredibly dumb, bringing it to the attention of viewers, who had previously not noticed or been bothered by it. Bousman knows his stuff and I’m fairly sure he was referencing the classic original. I’m afraid, while never sinking as low, this has rather more in common with Nicolas Cage’s woeful remake. 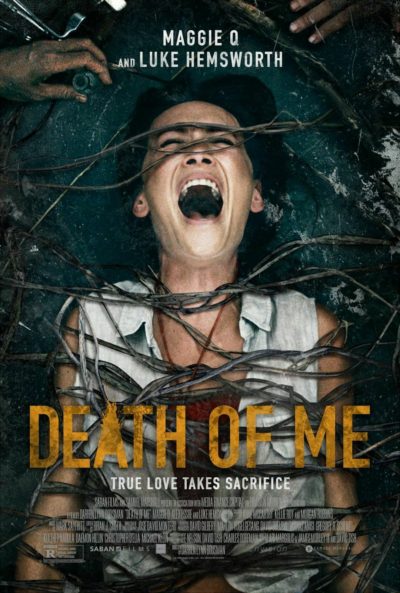 Christine (Q) and Neil (Hemsworth) are coming to the end of their holiday on an island off the Thai coast. But they wake on the final morning with the mother of all hangovers, unable to remember a thing about the night before. Their passports go missing, which makes them miss their ferry back to the mainland, and with a typhoon not seen in 200 years approaching, things are getting serious. Then they find Neil’s video of their missing evening, which has them accepting a drink in a local bar and Christine being given a pendant. Oh, and ends with Neil strangling his wife and burying her in a shallow grave. Insert title card: Death of Me.

For a bit, it feels like another film we saw recently, The Deep Ones, as it concentrates on Christine and her gynaecological state, questioning whether she’s losing her mind, while it gradually becomes clear the friendly locals have their own agenda. I think the point at which it toppled into Nic Cage territory was when Neil got stuck in a parade of masked villagers, which included a giant effigy of the heroine. Sadly, not made of wicker, but we’ll take it. As Chris pointed out, the increasing wobbliness of Christine, who is coughing up dirt and snakes, having visions of her husband yanking out his own intestines, etc. also brings us into Serpent and the Rainbow territory. This is perhaps particularly true at the end, though I’ll avoid details for spoiler purposes.

Due to this over-familiarity, I found there was a severe lack of impact. I vividly remember watching the original Wicker Man, and my aghast response – largely driven by Woodward’s amazing, reactive performance – when we finally realized his fate. There’s nothing at all like that here, though I did like the concept that… well, perhaps the residents’ actions are justified after all. Though if that is the case, they don’t make much sense: a local would surely have made for a much better candidate, especially given the specific requirements. Bousman’s films are always at least somewhat interesting to watch, and this does stay on the right side of ludicrous. It just never becomes more than a casserole of ideas from other movies, and doesn’t develop its own concepts enough to stand by itself.