In a rare sighting of a killer shark movie in a theatrical environment, this one actually received a cinema release, albeit the same day it was released on VOD. The prospect wasn’t enough to lure me back into the theatre, and in hindsight, this was wise. I’m sure the ropey CGI would not have been improved by being seen on a larger screen. However, there is at least half of a decent movie here, which is more than can be said for some of the shark films we’ve seen. At this point, we’ll settle for adequately entertaining.

The heroine is Jesse (Whelan), who has just had her heart broken by her fiance. Her friends, including the Sassy Black Girl and the Lovable Doofus, convince her to convert the planned honeymoon into a vacation to Hawaii, in order to get her mind off things. The highlight of this is a cruise on the boat belonging to Captain Wally (Morrone), which will drop Jesse and her pals off on a desert island. Meanwhile, a week earlier, a great white shark had eaten alive the daughter of Harlan (Adkins). Frustrated by the lack of action from the authorities, he has tooled up and gone full Quint. Harlan eventually crosses paths with what’s left of the holiday party, Wally somehow having failed to mention or even be aware of the presence of a man-eating monster in the vicinity, to the detriment of all concerned. 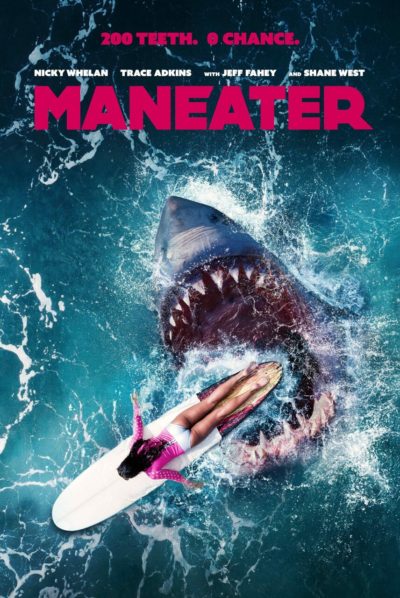 Harlan is the best thing about this, because he takes the consumption of his daughter very, very personally. This gives him a motive that’s more specific than most hunters, and Adkins is almost unhinged in his portrayal. He rants on multiple occasions about the shark killing for sport rather than food, and this whole angle almost feels like Moby Dick – or Orca, though Adkins is not exactly Richard Harris. It’s certainly more fun to watch than half-a-dozen young adults chatting to no particular effect, while the audience waits for them to get eaten. Which, I’m pleased to report, does happen to the majority of them in due course, through a series of moderately graphic scenes.

Jesse, it turns out, just graduated from pre-med, and I expected this medical knowledge to show relevance at some point. Don’t worry about it. I’m guessing her courses must not have covered treating shark-induced trauma with a towel and a belt, because she’s as useless and weepy as any civilian. She does eventually grow a spine, teaming up with Harlan for a final confrontation with the creature which is… certainly something. Note: “certainly something” should not be taken as an endorsement, or indication of any actual quality. The film ends in a way that suggests Lee is hopeful of this becoming a franchise, Harlan sailing the world as some kind of mercenary shark hitman. Likely more entertaining a concept than this is capable of delivering, to be frank.