This was a last-minute replacement, coming off the bench after I realized that I’d already seen selection Blood Bite before, when it was called Horror Shark. So, instead Cohn got his second film of this feature, and I was looking for something along the same, marginally competent lines as Swim. Despite these low expectations, I was still severely disappointed. For it could be the worst shark film I’ve seen to date. The set-up is simple enough. Photographer Jason (Pearson), model Sarah (McGarvin) and make-up assistant Meghan (Destefano) kayak out to a remote key for a photo-shoot. Sharkiness ensues, leaving Sarah’s father (Madsen) to coordinate the rescue operation. Oh, yeah: Sarah is Jason’s ex, while Meghan is Jason’s next. Awkward. 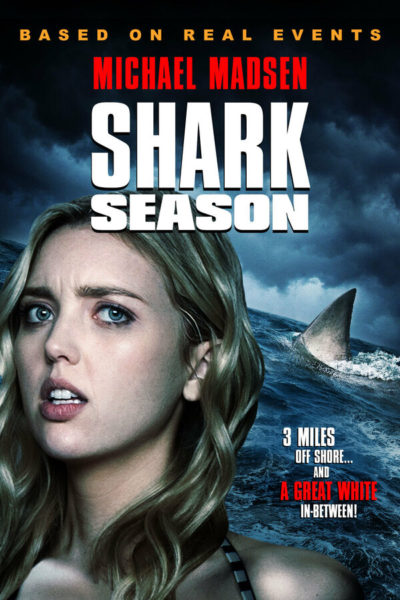 No element of this is better than terrible, beginning with the first phone conversation between Sarah and Dad, where we noticed he has the phone pressed to his ear, old folks’ style, while she is in FaceTime mode, presumably getting a lovely picture of his ear canal. [At the risk of stating the bleedin’ obvious, Madsen literally phones in his entire performance. I wonder if all Mike’s scenes were filmed at his own house] Things get worse when the trio hit the open sea with no life jackets. Mind you, the footage of them on the water is utterly unconvincing: shot from the waist up, I strongly suspect it was filmed in a swimming pool. Making matters worse, their complete lack of urgency at any point, whether being pursued by a shark, or simply heading to their destination. The lackadaisical paddling seen here, makes the languid kayakers of The Reef: Stalked look like a bunch of tweakers.

The low point, however, is an extended conversation between Dad and a shark expert, where the latter is almost entirely the back of his head. It goes on so long, as almost to acquire a surreal, artistic quality. The scene stands out, because it’s close to the only artistic quality this possesses. The trio of main characters at first seem semi-likeable, yet the more we get to know them, the more irritating they become. Their number being reduced by 33% doesn’t improve the situation. For the survivors engage in the kind of mindless discussions, which would be better suited for the end of the night at a wine bar.

The CGI effects are shit, and the makers also re-use the same live shark stock footage on multiple occasions. It doesn’t so much build to a climax, as grind its way towards an ending where – I kid you not – the shark is stabbed to death with a plastic oar. They don’t make aquatic killing machines like they used to, do they? Even as a stout supporter of The Asylum and their product, I find it very difficult to defend this one. It truly sets a low-water mark for the genre. That it originally showed up on Lifetime makes all too much sense.