This is a sequel to Traucki’s 2010 film, The Reef, whose synopsis reads: “A sailing trip becomes a disaster for a group of friends when the boat sinks and a white shark hunts the helpless passengers.” I haven’t seen it, yet based on that, I’m not sure I need to. Replace “sailing” with “kayaking”, and you’re more or less here. Perhaps lob in a bit from The Descent, the trip in this case being partly a memorial for a lost friend. Here, it’s to honour a woman who was drowned by her abusive husband. Her sisters, Nic (Liane) and Annie (Archer), head off with Jodie (Truong) and Lisa (Lister). It’s not long before they find themselves hunted by a shark, and needing to cross open water in order to get help for an injured young girl, who was also attacked. 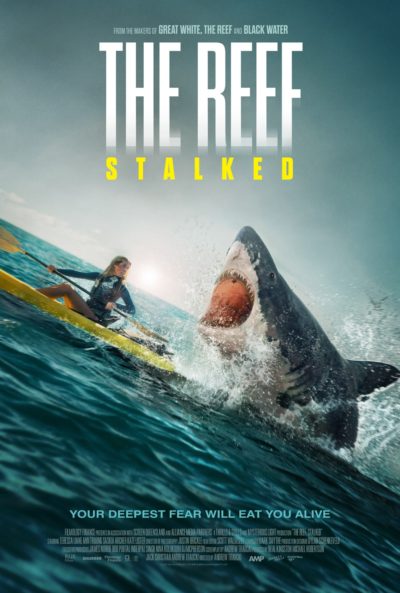 I joked about Swim being a metaphor for capitalism. I’m not joking when I say the shark here is a metaphor for toxic masculinity, as seen in the sisters’ murderous brother-in-law. He is literally the only man in the entire film. Fortunately, once they hit the water, it’s easy to forget the rather heavy-handed messaging which we get at the beginning. However, it does mean you know the death-toll here will be limited, because otherwise the patriarchy will have won. It’s also definitely the shark film with the most F-bombs I’ve ever seen, because Australia.

I will say, given the scenario, the heroines exhibit a real lack of urgency in their kayaking. I mean, I would be flailing away like an aquatic helicopter in their situation, rather than the languid paddling they demonstrate. On the other hand, the makers do an excellent job of combining footage of real sharks with practical effects and CGI. The results are generally effective, and occasionally impressive. The relationship between the women is nicely portrayed; they are not saints, and bicker over the best way to address the situation. Nic seems to be suffering an odd kind of PTSD, after the trauma of discovering her sister’s body in the bath. This translates into her suffering from drowning flashbacks somehow. While I dunno quite how that works, maybe a kayaking holiday isn’t the best idea?

As ever though, movies like this really are not about logical analysis, because a fear of being eaten alive by sharks isn’t logical either. [They cause maybe 10 deaths a year worldwide, compared to 2,000 killed after being struck by lightning] They need to connect with the audience on a more emotional, almost a primeval level, and this did it for me on enough occasions to justify its existence. I’m not convinced about the need to try and inject social commentary into shark movies: there are plenty of other horror sub-genres better suited to it. However, it’s still possible to set that aside and appreciate the simple, oceanic pleasures this has to offer.