Firstly, the title. “Requin” is French for “shark.” Which makes sense, in the context of the film, not least because it takes place in the former French colony of Vietnam. But why, then, is it The Requin, rather than Le Requin? I mean, pick a language, and stick with it. Next: Alicia Silverstone is 45. According to her IMDb, she’s been busy enough over the past 25 years: I’m just not sure I’ve seen much she has been in since Clueless. It was therefore a bit of a culture shock to see Cher looking all middle-aged and maternal, rather than the perky teenager I was expecting – the passage of approaching three decades be damned. 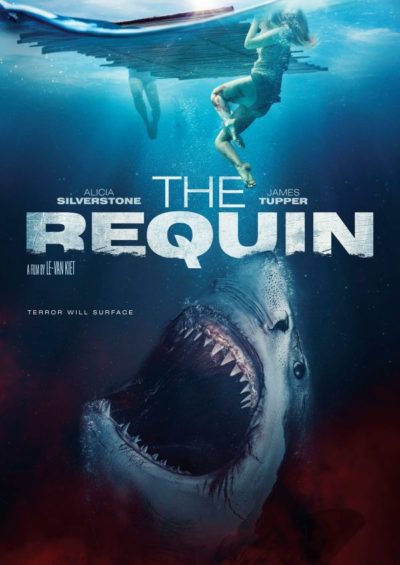 To the movie. Jaelyn (Silverstone) and her husband, Kyle (Tupper), have taken time off after a family tragedy, for a luxury vacation by the ocean in Vietnam. It’s going well, until an overnight storm blows their cabin off its foundations, and before they know it, they have been swept out to sea in their impromptu boat. Kyle hurts his leg during the incident, and an initially inspired attempt to signal for help goes badly wrong, leaving them on a mere fragment of debris. After they get at cross-porpoises for a bit (hohoho), le creature of the title eventually shows up – albeit close to an hour in. Things thereafter get considerably more up close and personal, in terms of encountering nature, than is comfortable for the married couple.

The last thirty minutes are fairly decent, at least in terms of pacing. For there is one truly terrible effects spot, where Jaelyn is using an outboard motor to defend herself (top), which has CGI blood that The Asylum would return to sender, as badly done and wholly inauthentic. Otherwise though, it’s relatively straightforward and well enough filmed to make for an acceptable climax. The issues are more front-loaded, not least that I was left not giving a damn about the family tragedy mentioned above. What relevance does it have, in regard to being cast adrift in the ocean? It’s both obvious and clumsily executed, to the point it’s almost counter-productive. When you title your film “The Shark” – even across two languages – WE DON’T CARE ABOUT CHARACTER DEVELOPMENT. I know the shark certainly didn’t.

It’s odd, as Kiet just delivered The Princess, which I really enjoyed and was thoroughly kick-ass. He also directed House in the Alley, which was the Vietnamese entry in 31 Countries of Horror, and was competent enough, if a bit derivative. I was hoping we’d get something of at least similar merit here and was disappointed that, by and large we didn’t. Admittedly, this optimism was in part because I wanted to say the film “came in like a Requin ball.” Instead, it goes to prove that a reasonably large budget (at $8.5 million, it perhaps cost as much as every other shark film we saw this week, combined), certainly does not necessarily lead to a product superior in quality.