At this stage in proceedings, I’m largely convinced that 90% of S.E. Asian horror films, be they Thai, Korean, or whatever, are ghost stories. I’m sure that’s fine for local consumption, but I can’t help wanting to see what they can do in other fields. Vietnam, based on a sample size of one, appears to be no different. While there are some twists here – most obviously, the up close and personal nature of proceedings – this is not much more than a haunted house movie, like others we’ve seen recently e.g. Take Me Home. 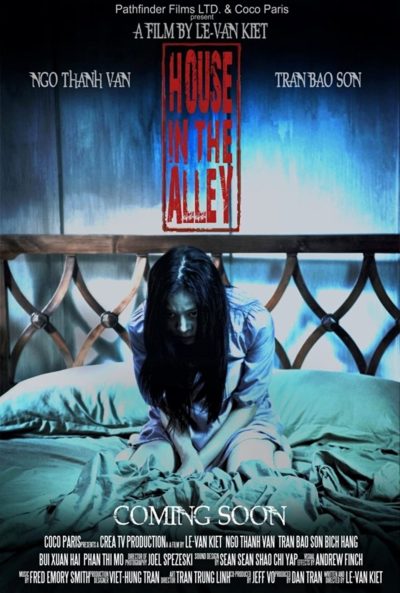 The victims here are Thann (Son) and Thao (Ngo), a married couple who have recently gone through the unthinkable trauma of losing their child when it was being born. This has hit Thao particularly hard, and she seems reluctant to move on. She keeps the baby’s coffin in their bedroom – not apparently as much of a mood-killer as you’d think – and wants to bury it in the courtyard of their house [This sent us scurrying down a rabbit-hole as to the legality of interring a body in your garden here in Arizona. To my surprise, it’s largely okay, if you get the necessary paperwork] Thann, meanwhile, has issues of his own: an overbearing mother (Tran) and workers in revolt at his factory. Then the obligatory weird stuff starts to happen, and Thann falls off the roof. A lot. No, seriously: there were at least three separate plummets, and it began to feel like a Fail Army vid.

That aside, it definitely errs on the side of understated. Though perhaps that’s just in comparison to a quite harrowing opening sequence which depicts the grim, still-born, birthing process. It’s hard not to feel complete sympathy for Thao thereafter, even as she sinks ever deeper into post-partum – and, indeed, post-mortem – depression, which manifests itself increasingly in murderous thoughts about her husband. Is it just psychological, or is there something more at work? The answer to that question is eventually provided as part of an extended coda, where Thann finds out the history of their house. This does feel rather tacked-on, and is a case where less might have been more.

This is at its best when exploring the horror of depression, and Ngo really hits that aspect out of the park. The loss of her child becomes a black fog that engulfs every second of her existence, gradually turning Thao against her husband. That, in itself, would have made for a decent story, building towards the climax here where, in an innovative gender swap, she goes full Jack Torrance. But this is S.E. Asia and, as noted above, the presence of supernatural entities seems almost obligatory. That left me feeling I’d seen too much of this before, and that’s a pity, since it had the chance to do something different and original with its topic.