Maas has now been pumping out off-kilter genre fodder for over 30 years. There was scuba slasher Amsterdamned (1988), killer elevator flick De Lift, and psycho-Santa movie Sint. All were a) very Dutch, and b) different enough to be memorable, even if their quality was a bit variable. This is exactly down the same line. Or same “lion”, if you will, since the threat here is a giant, hungry feline, which is prowling the streets and parks of Amsterdam, because… Well, why doesn’t matter. There’s some vague mention of Eastern Europeans freeing their pets. This is more about coping with the situation than the cause. Actually, it’s more about the gory mayhem than coping with the situation, if we’re to be honest. 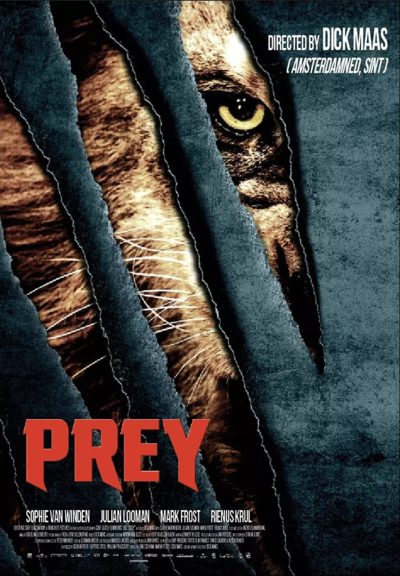 The first 30 minutes though are almost cringe-inducingly bad. Part of this is due to the dubbing. Part of this is due to one of the lead characters. TV cameraman Dave (Looman) is exactly the sort of smug, infuriating person he should have been first into the lion’s digestive tract. Sadly, we instead get hapless, painful banter between him and his on/off girlfriend, zoo vet Lizzy (van Winden). Whatever Maas’s strengths might be, romantic comedy is not among them. Matters are not helped when we see the lion, since it’s a largely CGI creation, which looks particularly weak when galloping through the streets of Amsterdam after a curry delivery guy.

However, matters improve drastically after a woeful attempt to kill the lion, apparently involving the Dutch version of Jack Black.  Lizzy calls in an old-friend, English big-game hunter, Jack (Frost). The general similarities to Jaws become more pointed, with Jack almost a parody of Quint. A hard drinker, he lost a leg to a lion, and now whizzes around in a motorized wheel-chair, speedy enough to keep up with a charging lion. He is perhaps the most bad-ass disabled character this side of Mr. No Legs, and the energy he brings to the film saves it almost single-handedly. Suddenly, the crappy digital cat doesn’t seem to matter, and another plus: the more screen-time Jack gets, the less we see of Dave, which is definitely a good thing.

The resulting insanity builds to a finale in and around the local university, in which Jack has to sacrifice another limb. But, wait! There’s more! For what seems to be an over-lengthy post-climax scene turns out to have a little extra to offer. Something you could probably see coming, if you’re familiar with this sub-genre, yet welcome none the less. By the end, I could only embrace its dead-pan silliness, and look forward to Prey 2. Oddly, this ended up the first Dutch film to get a wide release in China, opening in over four thousand screens there. Maybe this had something to do with the title under which it was released, translating as Violent Fierce Lion. I’d certainly go see that.