Ah, so that’s what Jörg Buttgereit has been doing. The creator of Nekromantik kinda dropped off my radar after Schramm in 1993, and it took sixteen years before his next festure, the intriguingly-named Captain Berlin versus Hitler. I’m not sure how much that reflects his earlier work, but his opening segment here, “Final Girl”, certainly seems not too far away the ultra-dark approach of his infamous films, though is more restrained. It begins innocently enough, with a girl (Gave) talking about her pet guinea pig and his health issues. But we eventually discover that she has her father tied to a bed in the apartment, and is torturing him, because… Well, to be honest, we never quite find out a specific reason. He probably… oh, abused her or something. We’re here for the brooding sense of unease and the removal of body parts, anyway, so who cares? 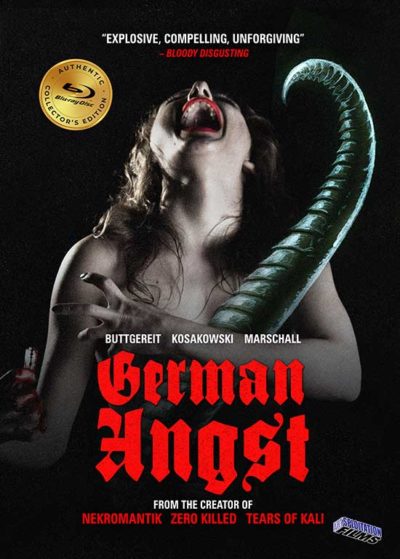 Kosakowski’s installment, “Make a Wish”, is perhaps the only one which reflects the collective title. It takes place in two periods, World War II (oh, look: angst!) and the present day, but in both, Germans are attacking Poles. The former sees a Nazi troop killing a Polish farmer and his family – but there is a medallion which switches souls between bodies, which changes the situation. The contemporary section sees a mute couple attacked by a gang of racist punks, but the girl possesses the medallion, which can save them. Or perhaps not. There is a real-world feel to the violence here that is quite chilling, but I’m not sure of the point here either, leaving it a pointless picking at the scabs of German history. It may be most interesting, when viewed in the light of Kosakowski’s previous film, Zero Killed, which saw people acted out their fantasies of murder…

Finally, and by some way the longest, is Marschall’s “Alraune”, which is the German term for mandrake root. In this, Eden (Welsh) goes down a rabbit-hole in pursuit of Kira, a woman he met online. This takes him to Club Mabuse, where he experiences a night of sexual ecstasy unlike anything he has previously experienced. Of course, as ever in such things, there is a price to be paid for this delight. It’s the most conventional, in terms of structure, and could easily have been its own feature. If you can imagine Videodrome set in Weimar Germany (while not that period, it has that decadent feel to it), you’ll be in the right area. Though this does have more tentacles.

I didn’t mind any of this, though I can’t say much of it particularly stuck with me either. I do have to say, each man definitely brought something different to the table, with three clearly individual styles here. However, only the second really paid notice to the “German” part of the title, and that was just the usual guilt; the other two could have taken place anywhere. A bit disappointing, given the directors, to find something which felt safer than I was wanting.