Remember back in the 2000’s, when it seemed every horror film had a spooky, long-haired ghost girl, striking terror into the hearts of the living? Cheng certainly does. While you can complain about the largely derivative nature of this (and, trust me, I will), you can’t argue with its success. At the time of its release, this became the most successful Taiwanese horror film of all time, and has since  spawned two sequels. I dunno, maybe import DVDs from Japan are not a thing in Taiwan, or the audience for this might have gone, “Hang on…” 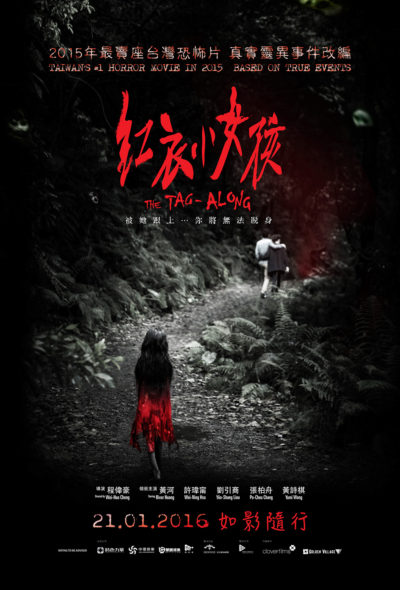 The one thing it does genuinely well, is a shift in focus. It begins as the story of Ho Chih-wei (Chang), a real estate agent. He lives with his grandmother Ho Wen Shu-fang (Liu), and fights with his girlfriend, Shen Yi-chun (Hsu), a radio host, about whether or not to settle down and start a family. After a trip to a mountainous forest region, Grandma begins behaving oddly, and eventually goes missing. Chih-Wei gets sent a camera with footage of the trip and sees an odd little girl in red, trailing the group. The same child appears on security camera recordings provided by local security guard, Uncle Kun (Chang), leading Granny away from their apartment. Though the senior citizen eventually returns, Chih-wei’s behaviour becomes increasingly erratic, before he vanishes. This is where the focus shifts to Yi-chun, as she seeks to solve the mystery, which will bring her back to the woods.

The look of this is nice, everything being given a sickly green pallour, that emphasizes the other-worldy nature of things. However, the script is an abysmal mess, which never establishes the internal consistency necessary for this to work. Just one example: who mails Chih-wei his grandmother’s camera? Did the little ghost girl pop to the supernatural supply closet, then the post office? There’s some half-hearted explanation of a superstition saying someone’s full name in the forest brings doom, and other suggestions this is a specter triggered by guilt. Quite how this leads to some of the insanity we see here is unclear. Perhaps it all makes more sense to a local audience; there is apparently a Taiwanese urban legend about misfortune befalling rural hikers, stalked by a girl in red. So maybe less explanation is needed there?

This vagueness doesn’t travel well, however, nor does things like Uncle Kun pulling double duty as an exorcist. Is that part of security guard training there? The film also goes to the “It was only a dream…” several scenes too often, diminishing in impact each time. There are some effective moments, most notably Chih-wei’s insectivorous dinner, and Hsu makes for a reasonably likeable heroine, when she eventually takes centre stage. There is just little in this you won’t have seen before, and neither is the execution good enough to elevate the material. This mediocrity in horror blockbusters is par for the course. After all, It is the biggest horror hit of all-time in North America, and that’s no classic either.