If ever there were a poster-child for the variability inherent in horror anthologies, this would be it. The rating above should likely be regarded as a high-water mark, skewed towards the two-and-a-half good episodes out of four which this provides (while there’s a fifth, inter-section segment, this is mostly a woman scrolling on her phone, and doesn’t offer enough content to come to a real judgment). The linking theme is the use of modern Internet technology for evil, though in one case, this is tangential at best. 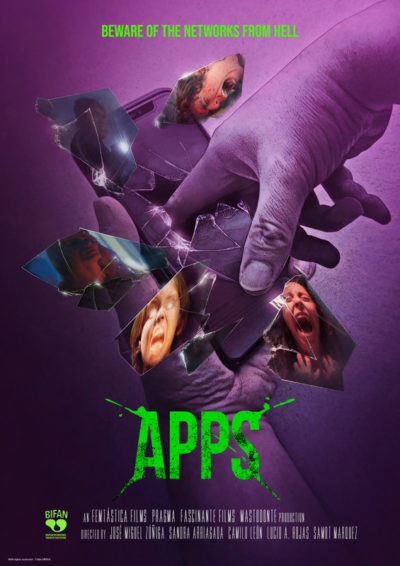 It really hits the ground running: you could make a case the first story, Eye Wolf is the strongest. A group of four men, with the unwilling help of one’s girlfriend, lure another woman to a deserted warehouse, with the aim of raping her and livestreaming it for profit. However, it turns out, their victim (Uribe) is not exactly the defenseless target they expected. This is a snappy, vicious entry, and could easily be a feature on its own. Then, unfortunately, there’s the second, Frequencia, which quickly pisses away all the accumulated goodwill. It has to do with a voyeur (León), who downloads an app that lets him listen to his neighbours. Or something. Because neither I nor Chris could figure out this incomprehensible mess, shot largely in near-darkness.

But, wait! Just as we were about to dismiss this, Eden shows up, in which a group of five young people head for their AirBNB-like accommodation near a music festival. Except it’s not what it seems on the app. This one goes from zero to holyfuckwhattheshittery in about five seconds, and doesn’t stop thereafter. It’s quite glorious in its unhinged mayhem. Finally, there’s the “half” mentioned above, On Fire; scored as such because I liked it, and Chris was less impressed, calling it a “low-rent Firestarter“. I can see her point, as it’s about a kid (Arriagada) with pyrokinesis. But I liked its tongue-in-cheek style – the young boy uses his ability mostly to disrupt his father’s online dating exploits e.g. by boiling one woman’s silicone implants out of her chest – as well as the mix of animation and live-action.

The fact there are five different directors, one for each segment, does result in a diversity of styles and approaches. Or “inconsistency”, if you prefer, for this is a double-edged sword. When it’s good, you want it to keep going along the same lines; when it isn’t, you’ll find yourself making “hurry up” gestures at the screen. While this is part of the territory for the sub-genre, I’m not sure I’ve seen an anthology where the results are quite so diverse. Despite the loosely unified theme, it feels more like a collection of independent shorts than a cohesive unit. Still, with two bullseyes and an inner ring result, I am prepared to forgive the total misfire of Frequencia.