The high-concept here might best be described as a cross between The Silence of the Lambs and Groundhog Day. Danielle (Corella) is at a party, which ends with her being abducted by Edgar (Barlow). He’s an incel who is seeking a soul-mate, and believes Danielle is The One, after seeing her profile on a dating site. She wakes up in his guest bedroom the next morning, but her subsequent escape attempt ends in her demise at his hands. It’s therefore a bit of a shock when, after a brief interlude with her late grandfather, she wakes up in his guest bedroom, as if nothing had happened, and Edgar repeating saying exactly the same things he said, when she first regained consciousness. 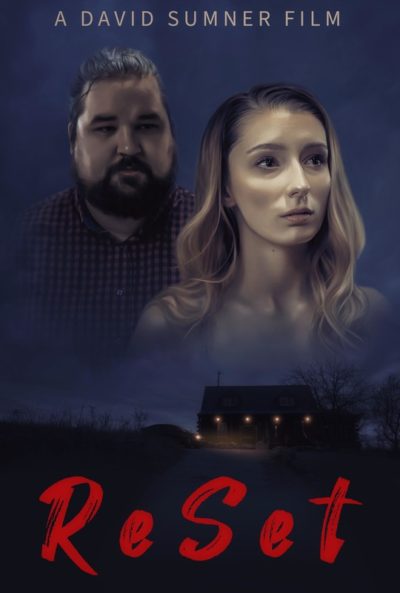 I will say, if you’re not paying total attention, you might not figure out the time loop immediately: it might have benefited from a particular marker (something like – and I’m just spitballing here – a Sonny and Cher song?) to signify the resetting. But once you get your brain around the concept, it’s entertaining to see Danielle working through the problems of her confinement, such as the way Edgar seems always one step ahead of her. Given this is basically two actors in one location for the vast bulk of the movie – it doesn’t hang around, with the first cycle beginning less than ten minutes in – the script does a good job of ringing the changes. Sometimes Danielle tries force; sometimes stealth; sometimes provocation. Each time, she learns a little more.

A lot of this stands or falls on the two leads. Barlow is competent, and provides a disturbingly plausible portrayal – yet one that occasionally evokes sympathy, or at least pity. Well, except his hair: we knew he was a bad guy as soon as we saw the manbun. But it’s Corella who is increasingly effective (once we get part the awkward and unconvincing party scene, anyway), becoming more likable as the film goes on. She’s smart, and easy to root for, as she slowly puts together the pieces that allow her to counter her captor. The only weak link is her grandfather, whom I’m guessing is played by the director’s father. Have we learned nothing about casting family members from The Godfather III?

Snark aside, this is a good example of recognizing your limitations and working within them. I’ve seen my share of low-budget movies that try and do too much; it rarely works, and they consequently end up spreading themselves perilously thin. This has, instead, opted to tell a story which won’t be hampered too badly by resources. My main criticism: there were parts where more blood seemed very much warranted, and the final fight between Danielle and Edgar was disappointingly tame. The trailer also does a poor job of selling the film too. But considering it’s a first feature for many involved, it’s more than competent, benefiting from a strong idea and central performance, which carry it over the occasional rough patch.

Screened as part of Phoenix FearCon 2021.