The slightly-more verbose (and less generic) original title translates as “The dark in which they live”, and provides a little more insight into the approach here. It’s about a group of four kidnappers, led by Martin (Rosenstein), who make their living by abducting people and holding them for ransom. However, Martin’s son is in need of an expensive operation, and so they decide to up the stakes. The gang obtain information about a young woman, Jessica (Ulloa), with a rich father, and pounce as she’s tending the garden at her home. But almost as soon as they get her back to their liar, things start to go wrong. 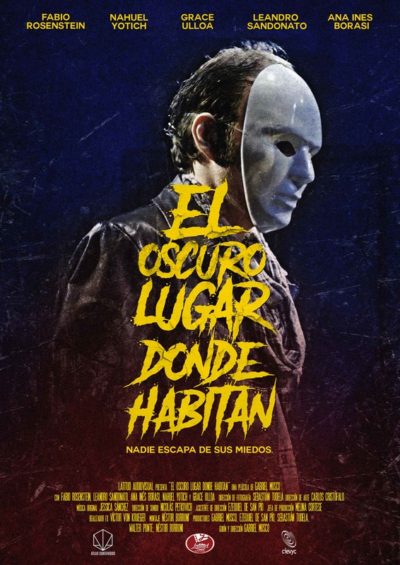 Most obviously, they can’t get in touch with the father, and when they re-visit the house, it’s now completely empty. Martin sends his brother Javier (Yotich) to try and figure out what happened – that is at least relatively prosaic, compared to the weirdness unfolding in their hideout. There, each member of the gang begins to endure experiences that make them confront their fears, from spiders through clowns to their time in prison. It gradually becomes clear that their abductee is not the innocent young girl she seems, as Javier discovers when he locates her father. As the old saying goes, Jessica is not locked in with them. They’re locked in with her.

The concept of everyone being put in a supernatural situation where they are faced with whatever terrifies them most isn’t particularly new. For instance, it was used on at least two episodes of Buffy the Vampire Slayer. But it seems to show up on TV more than films; oddly, I couldn’t find a case of a horror movie using it. Certainly, here it’s done with some style, opening with a scene of a woman being compelled to commit suicide [its significance may slide past: it wasn’t until the next morning that I suddenly went, “Oh!”] After that, it looks more like a thriller for the next 20-30 minutes. The horror elements only gradually rise up, as we find the kidnappers have made a terrible mistake in their choice of victim.

It definitely takes a more psychological than physical approach to terror, and will likely resonate most with those who have phobias of their own. But even as someone who doesn’t (except for wasps… and that’s a perfectly rational fear, thank you very much), this succeeded in crawling its way under my skin, courtesy of the well-built increasing sense of menace. Having Martin carry out the kidnapping for altruistic reasons definitely helps in terms of keeping the audience sympathetic with the criminals. Though this does teeter a bit when they discuss cutting their losses and killing Jessica in cold blood. Certainly, in some cases, they perhaps do deserve their terrifying fates. I’ll still be crossing “kidnapper” of my list of potential occupations for now.