The ghost story is, far and away, the most common sub-genre of Thai horror. While there are occasional forays elsewhere, such as zombie film The Driver, they’re very much the exception to the rule. In general, if you’re watching Thai horror, odds are there will be a vengeful spirit seeking retribution for something or other. I say this because, while this starts off looking as if it might go down a different road, that ends up being largely a red herring. By the end, you’re back in well-trodden territory involving pissed-off spirits reaching out from beyond the grave, to cause problems for the living. 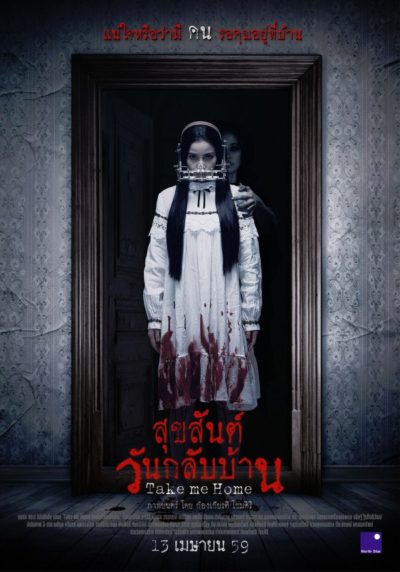 It does offer some variety, at least in setting. Generally, something like this would take place in a brooding Gothic mansion. Instead, the location here is a very modern, sleek looking home. Though it still seems to have the standard issues with the lights, common to the majority of haunted houses. Into it comes Tan (Maurer), who has been an amnesiac ever since coming out of a coma ten years previously. He has been working as a hospital orderly, and spending his spare time looking for the family he can’t remember. This brings him to the door of the house, where the housekeeper (Sukhakrit) recognizes him as the family’s long-lost son. Turned out his father killed himself after going bankrupt, but his twin sister Tubtim (Sonthichai) lives there with her husband Cheewin (Jayanama) and their two children. “Funny,” muses Cheewin, “she never told me she had a brother.”

Which should set alarms bells off – just the first of so many, the film sounds like VE Day. See also the mysterious exploding glass, just as the housekeeper was about to reveal… something. Or the way the suicidal father got the house for a steal. Or the stern warning to Tan not to wander the house after midnight. There might as well be blood oozing from the walls at this point. All of whichcomes to a head during a startling, extended (15-20 minute) sequence which is one of the better cinematic nightmares I’ve seen of late. Let’s just say, Tan discovers he won’t be leaving home any time soon.

Unfortunately, this is also where the film literally loses the plot. Because, thereafter, it’s impossible to be sure whether things are happening to Tan now, in the past or not at all. Then there are a bunch of occurrences which, being charitable, perhaps make more sense to local viewers; they certainly didn’t to me. Maurer’s performance, which had been quite nicely understated to that point, suddenly becomes 45 minutes of him pulling an appalled face (top). If you’re looking for a comparison, perhaps consider this as the Thai version of a giallo: a film where atmosphere appears to be considerably more important than a coherent plot. In the end, this feels as difficult to grasp as one of the spirits that inhabit it.