There’s something genuinely ethnic about this, which takes place in a township near Johannesburg, with an all-Black cast. The central character is Mthunzi (Mahamba), who makes a dubious deal with a local shaman, Bheka (Masinga), for wealth and power. This comes in the form of the tokoloshe, a spirit which will grant wishes to its owner, but these boons have to be paid for in blood. There are also rules which must be obeyed, such as him thanking the tokoloshe for its assistance, and also concerning the gourd through which Mthunzi communicates with it. Anybody care to guess if those rules are strictly followed, as Mthunzi’s demands gradually get ramped up? 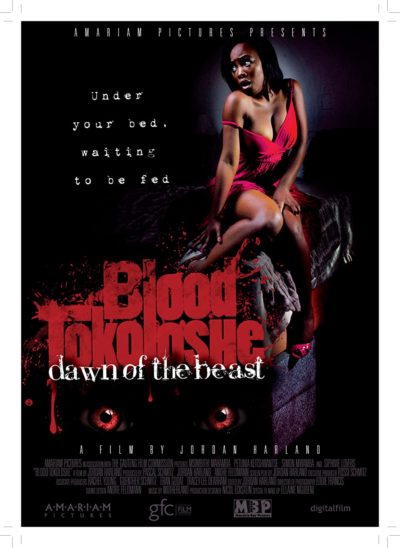 Of course not, and the results are rather more directly unpleasant than in Gremlins. While earlier requests needed just a non-lethal blood donation, the spirit is now off the leash and fatalities – depicted in POV from some kind of TokolosheCam – are mounting. This is much to the concern of Reverend Simon (Nwamba), though he initially writes off the attacks as the work of a feral animal. Bheka knows what’s up, however, and is willing to help try and rein in the out of control entity. But in the end, the only person who has any control over it is Mthunzi, and it’s not until the tokoloshe‘s predations hit increasingly close to home, that he gets on board.

Unfortunately, all the originality – in terms of this being folklore I haven’t seen on film before – can only take this so far. It’s never able to escape what are clearly its low-budget origins, with performances which, whether in English or Swahili, are rarely more than prosaic. They exist solely to get across the necessary plot information, and you’re never left caring about anyone. It doesn’t help that the film focuses on a man who seems to be a bit of a dick; Mthunzi is happy to reap the rewards, and shows no real concern for the people being terrified and attacked by his “pet”. As long as the money and babes keep flowing, it’s all good.

It might even have worked better, had Rev. Simon been a Peter Cushing type, balancing traditional faith with knowledge of the occult. Instead, he spends the first hour or so (and it only runs 75 minutes!), denying the creature’s existence, and is about as effective as a wet paper-bag. Admittedly, this may perhaps be the point – that Western religion is useless in such areas, as shown above, by Simon waving a crucifix at the tokoloshe as if it were a vampire. However, it does leave the film without anyone for whom the audience can root. The monster, when eventually seen, is quite effectively realized, with smoky edges that do a good job of concealing the lack of resources. If only the same could have been said about the script and performances.