What did I just watch? I guess this is what happens when you are picking films based entirely on country of origin and the genre selected by the streaming service (Tubi, in this case). I can’t argue with their choice of “horror”, given that “existential dread” wasn’t an option. Because this is the kind of movie which makes you question humanity. All of it. /broad sweeping gesture. But particularly Finland. The central character here is Veijo Haukka (Onnismaa), who runs a repair shop… with a sideline in putting down unwanted pets. Smaller ones are gassed in the back of a car. Larger ones are taken into the forest and shot. This man, ladies and gentlemen, is your hero. 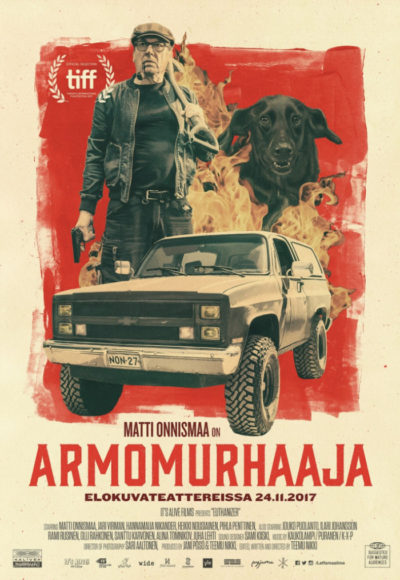 Yet, bizarrely, it works. Veijo is clearly an animal lover, giving short shrift to the many who fail to meet their responsibilities to the creatures who are their companions. But it’s complex. The same willingness to help animals out of a wretched situation does not apply to his father, confined to bed in hospital and wracked with pain. Then there’s the local bunch of white supremacist idiots, of whom Veijo runs afoul, in particular inept tyre thief Petri Kettu (Virman). Or his father’s nurse (Nikander), who has a taste for erotic asphyxiation, and sees Veijo as a role-model for her own job. Just about everyone here would fail the “Two Beers and a Puppy” test. It all feels remarkably… Finnish, in its pessimistic outlook on the human condition.

The horror comes from realizing you are the same species as people who regard dousing a dog in petrol, and setting it on fire, as a bit of a laugh. [If DoesTheDogDie.com had a blacklist, Euthanizer would be on it] This is a film which is almost relentlessly about cruelty of one kind or another, whether human-human or human-animal. In this world, Veijo may be far from perfect. But he is as good as the film-makers are going to provide. While I may not agree completely with Veijo’s morality, I can see his point of view, and have to admire the unwavering commitment he brings to it.

He is a believer in karma, and feels that it is up to him, when necessary, to deliver the universe’s retribution. Yet, despite the non-stop grimness on view, I actually found myself laughing out loud on more than one occasion – admittedly, then feeling bad about laughing. It’s the comedy of the absurd, such as karaokeing neo-Nazis, or where Veijo insists on playing a soothing song for the animals as he sends them to sleep. I didn’t recognize the song, but suspect the local audience probably would. On occasion, it does feel as if a foreign viewer is missing the joke, an element where the sheer Finnishness of this may work somewhat against it. But in the end, this is a horror film which makes you think. And that may be among the scariest kind of all.