Despite attempts to link this to another lethal doll franchise – “supernatural riff on the Chucky series” – this feels more like a segment from a seventies Amicus anthology. There’s the problem, too. What would potentially work very nicely at 20-25 minutes is stretched perilously thin at 90. The novelty value of it being, if not the first Mongolian film I’ve seen, the first not to heavily feature yurts, isn’t enough to carry it. 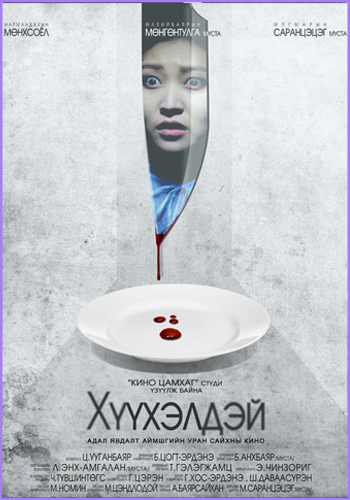 The heroine is Saraa, played by Munkhsoyol. At least, I presume so, the credits are entirely in Mongolian, so I’m going off that being the first name listed in the IMDb. Given the English subtitles appear to rely heavily on Google Translate, you’ll take what you get, and be grateful for it. She comes into possession of a creepy doll, and when she accidentally bleeds near it, experiences a vision. In it, the doll comes alive, looking disturbingly like a mini version of Robert Smith in drag (above), and says it will grant her wishes, if she keeps feeding it blood. Initially doubtful, Saraa wishes for money to deal with her financial problems. The doll delivers – but in the form of a bus crash which kills five people. [Personally, I was most excited to hear the bus-driver was listening to Abba just before the crash. Some things truly are universal…] This sets the pattern: the doll does fulfill Saraa’s wishes. Just with the evil approach of a D&D dungeon-master.

Next up: punishing the co-worker, Buyanaa, who raped Saraa after an office function. He definitely gets the best death, though the bus-crash is surprisingly well done. Buyanaa engages in an extended sequence of self-mutilation at work, including slicing off his own fingers with a paper guillotine, before plunging through a window. Turns out that’s not the end for him either. Then Saraa wishes her ailing mother back to full health, clearly never having read classic tale, The Monkey’s Paw. Tsogt-Erdene apparently has, however, so when Mom comes back, she has… changed. In particular, her eating habits, if you know what I mean.

While it has a decent idea at its heart, there’s just not enough development or sense of escalation. Instead, you get pointless scenes such as Saraa getting drunk, which seems nothing but a plug for the City Lounge Bar. I’m sure this is a prime entertainment venue in the Mongolian capital, Ulaanbaatar. After Saraa’s initial vision, anyone with a rudimentary knowledge of this genre will be able to guess how the rest of this plays out. And you’ll mostly be correct, right down to the “Six months later” coda, whose final reveal is telegraphed as soon as you see a certain piece of medical technology. You can forgive a lack of experience when it comes to making horror movies: every country has to start somewhere. But this feels as if the makers have never seen a horror movie. Sometimes, simplicity can work for a film. However, this isn’t one of those cases.