Y’know, for the great bulk of this, I didn’t mind it too much. Though to be clear, it’s probably more accurately described as a “shark adjacent movie,” rather than a shark movie. There are a a couple of sharks in it, true. They occasionally eat people. Yet this feels kinda secondary to the other stuff – and when you reach the ending, you may well understand why they opted to ignore the more piscine elements. We’ll get to that. For the main, it’s a low-rent version of Jaws, set in Texas, where local game warden Spencer Timms  (Hallum, doing a decent impression of a redneck Brad Pitt) is called on after a corpse is found in a lake with a shark’s tooth embedded in its back. 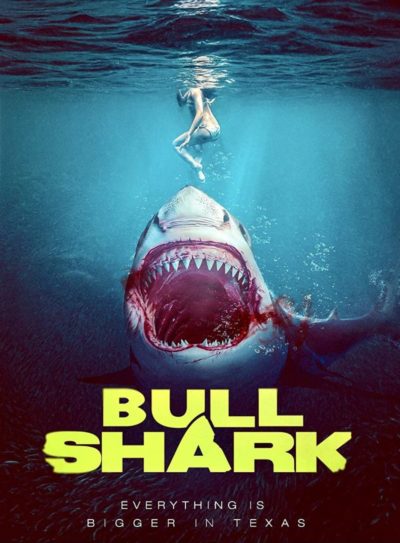 Can’t possibly be a shark though, as everyone knows they don’t live in fresh water. The mayor (Ray) is particularly keen to hush things up, despite Spencer’s concerns, and desire to close the lake. He also has to deal with the future ex-Mrs. Timms (Wilson), who is filing for divorce, handle his teenage son, and figure out whether or not he is an alcoholic. All of which hardly leaves any time for shark fightin’. However, despite the lack on that front, I still found it adequately entertaining. There’s an easy-going and laid-back nature which is a bit reminiscent of the excellent Lake Placid, along with the bickering between game warden and sheriff – although this lacks the same, deliciously acidic bite.

In this line, I enjoyed the goofy charms of Nolan Holt (Blair) who, with his Lynyrd Skynyrd and Wrestlemania T-shirts, is even more rednecky than Spencer. It’d have been fun to have had those two pair up with the sheriff and go after the creature. Instead… oh, dear. It’s one of the most embarrassingly flat excuses for a climax I’ve seen, in which Spencer and his wife hit the lake, with a Thermos containing C-4. Cue the bad, bad digital effects. It whizzes past so quickly, it’s clear even the makers realized how terrible the end product was, and opted to get it over with, as fast as possible. I actually rewound the movie to check. It was no better the second time.

It’s a shame, since up until this point, the movie had managed to do a fair bit with very little e.g. very little sharks and very, very little shark attacks, a bit of thrashing around in shallow water being about the extent of it. Yet I didn’t mind. The hero is personable, and I found myself caring about his non-shark problems, even if the whole “estranged spouse” thing has been a cliché since Die Hard. If it hadn’t fallen apart so (non-)spectacularly at the end, it would have had a shot at being the best film seen in this series. Unfortunately, when it comes to movies, last impressions are the lasting ones.