There’s a long tradition of Great British Actors slumming it in movies for a pay-cheque. The results can sometimes be great fun, e.g. Dame Judi Dench in The Chronicles of Riddick. But Michael Caine’s infamous quote about Jaws: The Revenge summarizes the approach. “I have never seen it, but by all accounts it is terrible. However, I have seen the house that it built, and it is terrific.” Usually, they wait until late in their careers: Idris Elba, still in his forties when making this, is clearly ahead of the curve. Already a national treasure, he’s inevitably linked to any iconic Brit-role, from James Bond to Doctor Who, so I trust he was adequately compensated for this.

He is Dr. Nate Samuels, a widower who goes on an African safari with his adorable moppets, Meredith (Halley) and Nora (Jeffries), plus local biologist and family friend, Martin Battles (Copley). However, they unwittingly wander into an ill-explained war between poachers and the local lions, in a wildlife preserve which is weirdly devoid of any other species. Seriously: would it have killed the makers to lob in some stock-footage of gazelles? Anyhoo, the group end up cut off and being hunted by a rogue lion. There. That’s your plot. Oh, there is other stuff such as Nate’s guilt over his dead wife, who either died of cancer or was eaten by a lion. I forget which: it can safely be ignored, either way. 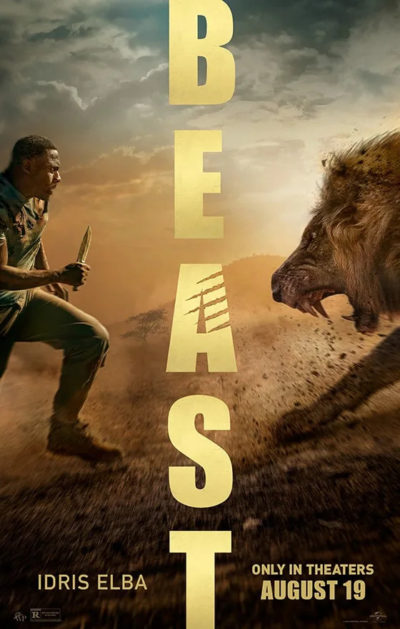 The bits that work, are when there are actual lions on the screen. Usually just the one, though occasionally more. For largely CGI creations, the effects are generally good, and occasionally damn impressive. For instance, there are scenes where Martin is interacting with “his” pride, that genuinely look as if he’s faffing around with big cats. There’s an impact and a weight to them, which makes their predation effective. Shame the movie blows it with a finale which has Nate going toe-to-toe with a lion. Even though his opponent is slightly singed and has seen better days, it feels ludicrous for him to hold out for as long as five seconds. Even if he would make an excellent 007.

Still, a bigger problem is, there is not enough of thus. You get a lot of meandering through the South African bush, and a further uninteresting subplot where humans turn out to be a bigger threat than the animals. Until the lions arrive, and with impressive olfactory talents, eat only the bad people. Then again, we also have good and bad lions. The former demonstrate a protective attitude towards all mankind (even those they have met only briefly) which seemed to have strayed in from a Disney cartoon. If the body count of significant characters here had been higher, this would have felt like an upper-tier version of those shark movies. Instead, I can only presume Elba got a decent semi-detached residence out of this for his Mum. Possibly with an attached guesthouse.