Oh, dear. Up front: The Railway Children is one of my all-time favourite films, and churning out a follow-up fifty years later, was always a dicey proposition. While this starts well enough, it falls apart the further on it goes, and the enormous goodwill generated by its predecessor, along with the presence of Agutter, can only go so far. This story shifts to 1944, when three children – once more, two girls and a boy, the oldest being Lily (Gadsdon) – are evacuated to Oakworth to avoid the bombing of their city. There, they are taken in by the Waterbury family, including grandmother Bobbie (Agutter), schoolteacher mother Annie and her son Thomas (Haynes). So far so good: indeed, the opening scene where the evacuees’ mother bids them farewell is flat-out excellent, and gave me hope.

The problem is the core plot which then develops. American GIs are in town, and one of them is black teenager Abe (Gadsdon), who lied about his age to enlist, only to find himself the target of racist bullying by the military police. He deserts, is found hiding out in a railway carriage, so Lily and her siblings decide to try and help him escape. It’s not necessarily a bad story: it just feels utterly inappropriate for this film. As noted in my review of the original, while the OG had social concerns, these were deftly played, rather than as here, apparently shoehorned in because #BlackLivesMatter. 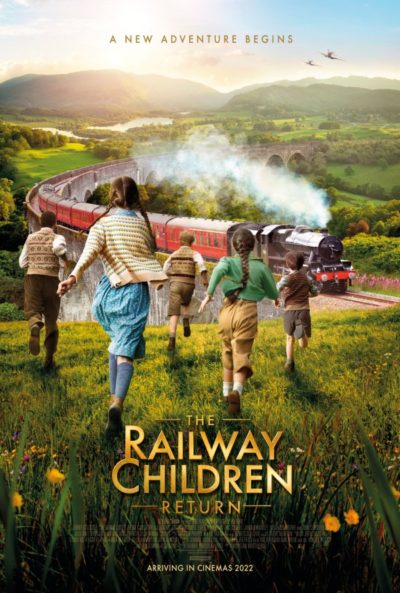 At one point I began to wonder if Lily was going to lead the local children in, perhaps, looting the greengrocer and burning down the railway station to protest the irredeemably racist system and its treatment of Abe. Fortunately, the underage mob merely stops at disrupting rail services – and not, please note, because there was a tree on the line. I’m not sure what OG Bobby would have thought of this uncouth behaviour, although the film is also sure to shoehorn in a clunky conversation about her having been a Suffragette. It doesn’t help that there’s a lot of lying here. Abe lies about being a deserter. Annie lies to Thomas about his soldier father’s fate. Honesty seems at a premium, and the children are aggressively rude to grown-ups.

Really, in comparison to OG trio, these three come across as self-centred brats: Thomas has a better moral compass than them. It’s mostly when this nods directly back at its predecessor, that there is any emotional impact, and it’s mostly reflexive nostalgia. It has absolutely nothing in the same solar-system as the finale of the original, of course. This could certainly have been recycled, and would have offered better closure than a series of captions after a curiously abrupt ending. The supporting cast are either bad (Tom Courtenay delivers his lines like he is having a stroke) or irrelevant (Game of Thrones‘s John Bradley as the station master). Failing to offer most of the simple, innocent pleasures of the original, we shall simply never speak of this again. That whirring sound is Lionel Jeffries turning in his grave.