I will not even attempt to claim that this is any good, by traditional measures. Yet I still enjoyed it adequately, for all the woeful inadequacies. The flaw which annoyed me most was likely the false advertising of the title. Outside of an opening sequence, which has about the least convincing “Loch Ness” in cinema history (top), the whole thing takes place in Lake Superior. Which, I need hardly point out, is not Scotland at all. I’m not even sure it’s Lake Superior either: I suspect it may be the Pacific Northwest, standing in for both locations. Scenic though this is, it’s asking for a whisky and being given Canadian Club. You’ll drink it, but you don’t have to like it.

The prologue takes place in 1976 when young kid James Murphy has accompanied his researcher father to Loch Ness. A giant egg is found; barely has it been taken out of the water, before Mommy shows up. She is pissed, in a way only a 40-foot cryptid can be, eating everyone except for young Jimmy. 30 years later, he is now a cryptozoologist (Krause), with a Captain Ahab-like grudge against the species. He gets a report of one in Lake Probably Not Superior, and goes to investigate. He meets local kid Josh Riley (Matter), his mom (Genzel) who is also the local sheriff and Josh’s ex-girlfriend, Zoe (Borycki). Meanwhile, people are vanishing and turning up severely nibbled. Sheriff Riley is baffled; apparently it’s a stealth plesiosaur, leaving no trace or witnesses. 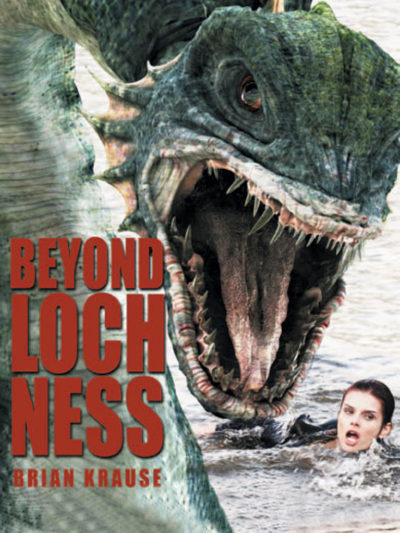 Oh, and it’s also a prolific creature, with a slew of equally voracious plesiosaurettes roaming about as well. Fortunately, Murphy is equipped with cyanide-tipped bullets, a sonar gun and an EMP weapon that can cook a 20-ton reptile from the inside out in ten seconds. Nessie tacos for all! Yeah, I was offended by the film’s repeated, casual dropping of the N-word. It’s only “Nessie” if it’s in Loch Ness, bitches. The film is unclear whether or not this is the same monster as ate James’s father at the start. There’s discussion of subterranean tunnels, yet the two bodies of water are some 3,300 miles apart. Do these beasts migrate, like swallows? And is that the African or European swallow?

The CGI is mostly crappy, yet the makers don’t hold back, clearly intent on getting the most out of their plesio-polygons. The babies are more practical, resembling the tentacles in Tremors, and there’s a surprising amount of energetic carnage, with people losing limbs or being chomped entirely in half. This helped sustain interest when the human characters and their issues failed to do so – which would be the majority of the time. I really did not care one bit about the love triangle between Josh, Zoe and Zoe’s douchey current boyfriend, who might as well have “Plesiosaur fodder” written across his forehead. It feels like this wants to be a cross between Jurassic Park and Lake Placid. Can’t hold a candle to either, naturally; still, guess it’s good for even B-movies to have aspirations.