I was interested to see what the director of classics like Metropolis and M might do after his departure from Germany in the early days of the Third Reich. Judging by this… Well, I guess it’s a competent enough wartime thriller. However, there’s not much to distinguish it from any other of its ilk, and this is certainly not breaking new ground, in the way of those earlier movies. It could be most interesting as a snapshot of life during the Blitz in World War II. For example, a time when the biggest selling point you could say about a cake, was that it contained “real eggs.” [At the time, the allotted ration was one fresh egg per person per week!]

Said dessert turns out to be integral to the plot. Stephen Neale (Milland) has just been released from an asylum, for reasons we’ll get to later. As he heads up to London, he pauses at a charity fete, and comes into possession of a cake. On the train, he is mugged for it, though the attacker is blown up in an air-raid while trying to shoot Stephen. Understandably annoyed by this, he investigates the group behind the fete, the Mothers of Free Nations, run by refugee siblings Carla (Reynolds) and Willi (Esmond) Hilfe, and quickly discovers apparent spy-related shenanigans. However, these include Stephen being frames for murder at a seance, and with the help of Carla, he is forced on the run as he tries to find evidence of what’s going on. 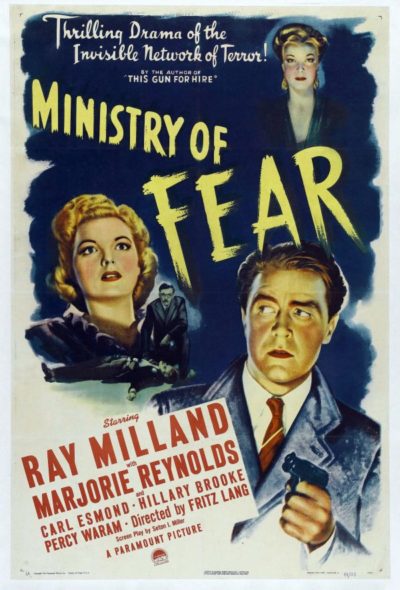 There are rather too many elements here which caused me to raise an eyebrow. For example, the police allowing a murder suspect to roam freely at the scene of a related incident, pottering about with evidence. Or the military authorities letting this Joe Random view highly classified maps. Or Carla quickly falling for a man who, it turns out, was locked up for ending the life of his previous wife. Mercy killing or not, I’d be a tad more circumspect about hooking up with someone like that. Maybe it was a forties thing. By the end, I had also discovered the secret to identifying spies: the stronger zer Jermain ackcent, the more likely they were to be bad guys. No wonder the Nazis lost the war.

It was based on a novel by Grahame Greene (who also wrote The Third Man), in which Stephen’s guilt about killing his spouse was apparently a much more significant element. Carla is also not an innocent as in the film, and this does make their relationship – based partly on both bearing the weight of previous, questionable actions – rather more plausible. Here, Milland makes for a decent hero, and the black-and-white cinematography is crisp; this is the element which probably has most in common with Lang’s best-known works. It ends with a roof-top shoot-out in the blackout (top), which is quite striking and effective. I really can’t say the same about the script, even if I’ll never look at a “Guess the cake’s weight” carnival game quite the same.