Oh, dear. A few months back, I gave a lukewarm review to Arizona horror film Water: the technical elements were okay, it was largely the story-line that was a mess. I concluded, “Let’s just hope Penza gets someone else to write the sequel.” No such luck. Indeed, it’s even more of a confusing and incoherent jumble than previously. Maybe Penza is the cinematic version of Benjamin Button, growing less skilled as a writer with experience? For this is a palpably worse script than its predecessor, and that was no great shakes to begin with.

It brings back Stephanie Yates (Mitchell) from the previous film, who is moving into a new house, to try and get away from the trauma she endured in it. She is chatted up by moving guy George (Coury), in a scene which sets a new standard in terms of awkward lack of chemistry. Meanwhile, a water delivery guy has his hand chopped off by the sliding door on his truck. Yeah, apparently the liquid menace from last time is also back, still bearing a grudge. Stephanie and George start a relationship, bring his son over to play with her daughter, Dani (Sovek). This disgruntles his ex-wife, Meredith (Johnson), and when starts sneaking around the house uninvited, becomes one of the water’s victims. As does an inquisitive private investigator and a flamingly gay neighbour. Eventually, Stephanie calls in her mother, and the truth is revealed. 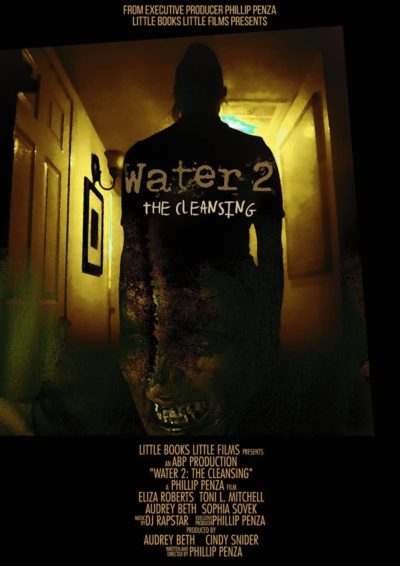 Well, for some loose version of “truth” anyway, since there appears to be little or no logic in regard to almost any aspect of the proceedings. How does the water operate? What causes a victim to be targeted? Are there limits to its power? Even allowing for a supernatural explanation, there still needs to be a degree of structure present. Here, however, it seems like it can do anything to anyone, at any time, for any reason (or lack thereof). At one point, there are even shots suggesting some kind of mermaid-like water sprite is living in the pool. Hell, I would have settled for that. Except it’s discarded without explanation, and the final reel instead goes into cheap Exorcist knock-off territory, complete with head rotation.

Let me be clear: the parts of this that are interesting, make no sense. And the parts that make sense, are uninteresting. The sudden switch from haunted swimming pool to demonic possession in the final quarter appears to indicate that Penza simply lost interest in the former subject, after have made approximately 1.75 feature films on the topic. I did have to laugh, however, when the priest performing the exorcism says, “The power of Christ compels you!” and the subject of the ritual spits back, “I’ve seen that movie! Not impressed!” Hey, I feel The Exorcist is somewhat over-rated. But for this poverty-row sequel to throw shade at in such a fashion, demonstrates a level of hubris that’s equally impressive and unjustified. I’ve seen this movie, Mr. Penza. Not impressed.