Per the director, “If you can tell me what genre it belongs in, I’ll be grateful.” Nope. Sorry. I’ve got nothing. It’s kinda a one location drama, taking place almost entirely in a single Hamburg apartment while the city was on lockdown, over the festive season. But it’s somewhat of a fantasy as well, and often darkly amusing. Again, per Henriks, it contains characters and motifs from Ovid’s Metamorphoses. Which I have not read, though according to Wikipedia, “scholars have found it difficult to place the Metamorphoses in a genre.” So there’s that in common with the movie. I can say, my ignorance didn’t really seem to matter: the film stands well enough on its own, though perhaps familiarity with Ovid could add extra depth.

The apartment is owned by Tom (Ellmers), a cop with a sideline in dealing weed. His flatmate is Vivienne (Roncalli), who has long held a candle for Tom, to which he is totally oblivious, since he hasn’t got over his ex-girlfriend Sophie. One morning, there’s a knock on the door. It’s the highly eccentric Peter (Burghart), who wants to buy some drugs from Tom. Specifically, four drugs. He asks Tom to roll him a joint, and before you know it, pizza has been consumed, beers drunk and the sudden announcement of the lockdown results in Peter becoming a new flatmate. As the days turn into months, the unlikely trio stagnate in their residence, yet with a little prodding from Peter, both Tom and Vivienne come to realize certain truths, which perhaps offer them a path forward. 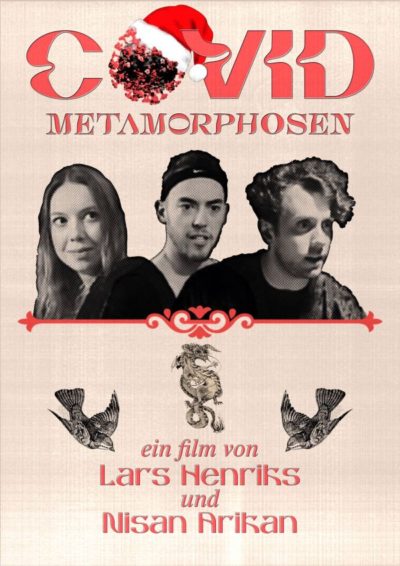 Peter is the most apparently mythological character, whom we first meet standing on top of a burned-out car, proclaiming lines like, “My soul is wrought to sing of forms transformed to bodies new and strange! Immortal gods inspire my heart, for ye have changed yourselves.” Where does he come from? Where does he go? He feels like a messenger of the Greek gods – or perhaps even a god himself, bored with life in Olympus. For a while, I thought it was Henriks himself playing the character. There’s a naivety present, yet you sense this is a cover for deep wisdom – if Tom and Vivienne don’t kill him first.

For Peter has certain traits, such as a childlike complete lack of filter, which make him perhaps the worst possible person with whom to go through lockdown. However, he’s still likeable, and again, Henriks does a very good job of creating characters with whom you don’t mind being confined. They all seem very real, from Vivienne’s little comic drawings, to Tom’s wrestling fandom (if there’s isn’t a WWE faction called the “Chainsaw Gutfuck Crew”, there should be). She and he are so clearly wrong for each other, by the end of things you’re rooting for them not to fall in love. So if you put a gun to my head and demand a genre, let’s call it a fantastical anti-romance. Yeah, I think I’m fine with that.